Modern by Tradition: Innovation and the Transformation of Seminole Culture 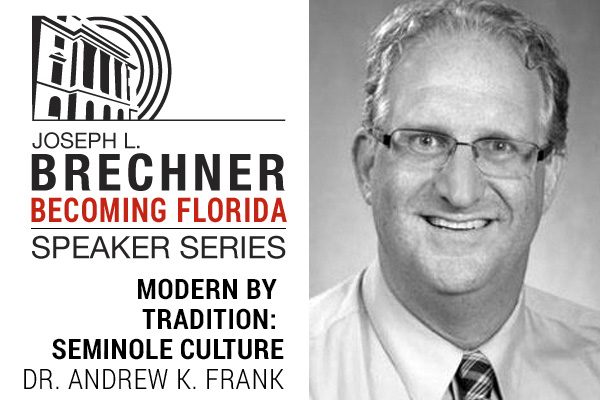 Between 1700 and today, the culture of the Florida Seminoles has remained remarkably connected to its roots while also innovating in dramatic fashion, becoming both modern and traditional and reflected in Seminole origin stories, dress, cuisine, housing, ceremonies, and family life.

Andrew K. Frank is a specialist in the history of the Seminoles of Florida. He is the Allen Morris Professor of History at Florida State University and an award-winning author and editor of many books and articles and books, including Before the Pioneers: Indians, Settlers, Slaves, and the Founding of Miami and The Seminole: The History and Culture of Native Americans. He is currently finishing a book-length manuscript titled Those Who Camp at a Distance: The Seminoles and Indians of Florida—a synthesis of the history of the Seminoles from their origin until the present.

This free event will be held via the Zoom platform.

The year 2021 will mark 200 years since Florida’s American era began. This year’s theme of our Brechner Speaker Series, “Becoming Florida,” is an exploration of the histories of the people who inhabited Florida before it became a United States territory.

Register for Event: Modern by Tradition: Innovation and the Transformation of Seminole Culture

Your ticket for the: Modern by Tradition: Innovation and the Transformation of Seminole Culture

Modern by Tradition: Innovation and the Transformation of Seminole Culture