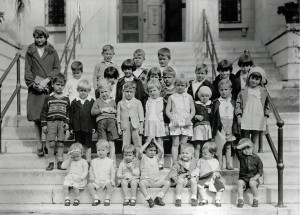 National Library Weeks happens in April, and you might be interested to learn that the current iconic Orlando Public Library at the corner of Central Boulevard and Magnolia was not the first public library in our city.

The journey for publically available knowledge for Orlandoans began in the late 19th century. This treasure, begun by the Sorosis Club as a small mobile book service, has grown into today’s sprawling 16-branch library system—serving communities from Winter Garden to Eatonville. The women’s club, named after the Latin word for sisterhood, housed its book collection in members’ homes and in their downtown building at the corner of Court and Pine. The club’s collection laid the foundation to build the first city-owned library, but it needed additional support.

That support came from two sources: first, from a successful countywide vote, which allowed for a publically funded library system, and second, from Captain Charles L. Albertson. Albertson had moved to New York City from a farm in Windsor, New York, at the age of 23 to serve in the New York Police Department. He oversaw four precincts as captain and was the inspector for Bronx and Harlem until his retirement. After retiring in 1913, he moved to Orlando. Being a voracious reader and book collector, he brought his extensive book collection with him.

In a 1925 letter after the opening of the library, Captain Albertson wrote about what the library meant to him: “It is my desire to be buried in front of the Albertson Public Library,” he wrote. “ I have worked many years to collect the books which were the nucleus of this library. This is my monument, permit me to be there.”

While Albertson was not buried on the site, the city and library memorialized his generation donation through a plaque near the original site of the library, and the current library named its largest meeting room in his honor.

With Orlando’s booming population in the 1940s and ’50s, the institution quickly outgrew its original building. According to the 1958-1959 annual report, the library maintained 132,000 books, a 560 percent increase, and served 37,000 citizens per year. These new materials and services required a new, larger building, on which construction began in 1962. The Albertson Public Library was demolished in 1964, and Captain Albertson’s books were removed from circulation in order to preserve them. Captain Albertson’s generous donation helped provide the necessary support to fulfill the Sorosis Club’s wishes, creating one of our city’s most utilized resources.

Dan Bradfield is the Oral Historian at the Orange County Regional History Center.

Your ticket for the: Orlando’s Earliest Library