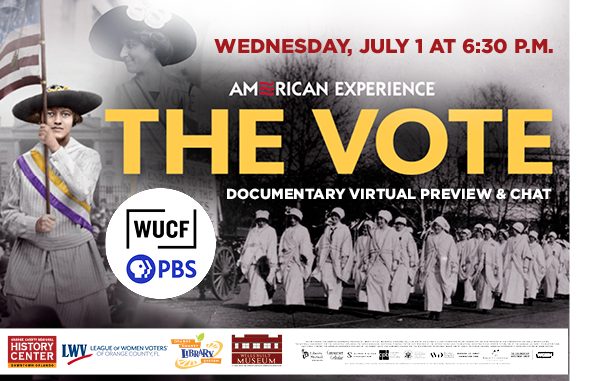 Join us July 1 to celebrate the centennial of the 19th Amendment with an advance, online preview of a new PBS documentary, “American Experience: The Vote,” which tells the dramatic story of an epic crusade waged by American women over decades. By exploring how and why millions of Americans mobilized for — and against — votes for women, the film brings to life the unsung leaders of the movement, as well as the deep controversies over gender roles and race that divided Americans then — and continue to dominate political discourse today.

Our July 1 insiders’ advance look features a compelling 25-minute clip from The Vote, after which two Central Florida leaders, the Hon. Linda Chapin and state Rep. Geraldine Thompson will talk about the suffragists’ legacy and the importance for all Americans of the right to vote. Orange County’s first elected mayor, Chapin chairs the Orange County League of Women Voters’ celebration of the women’s suffrage centennial in 2020. A longtime lawmaker and educator, Thompson is the founder of the Wells’built Museum of African American History and Culture.

This online preview will take place via OVEE, a service that allows participants to watch streaming media together and chat live in a virtual theater. All you need to participate is a computer, tablet, or other devices with a good internet connection. Before the event, we recommend you run a test to ensure OVEE works properly on your device. Viewers are invited to submit questions via chat.

The full documentary The Vote premieres Monday and Tuesday, July 6 and 7, 9-11 p.m. on WUCF, PBS.org, and the PBS Video App.

Your ticket for the: The Vote Documentary Virtual Preview & Chat