By Lesleyanne Drake, Curator of Collections

As rumors circulate about the possibility of a Lethal Weapon 5, some Orlandoans may remember that our city has its own connection to the famous action movie franchise: the demolition of the old Orlando City Hall in the opening scene of Lethal Weapon 3.

The movie begins with its two heroes, LAPD officers Riggs and Murtaugh (played by Mel Gibson and Danny Glover, respectively), responding to a bomb threat at International Control Systems, Inc. (played by Orlando City Hall). Convinced that there is no bomb, Riggs saunters into the building with a reluctant Murtaugh at his heels, only to discover a car full of plastic explosives and one stray cat who decided not to evacuate. When Riggs’ attempt to disarm the bomb only succeeds in speeding up the countdown timer, he and Murtaugh barely escape with their lives before the building is engulfed in a fiery blast. The pair does manage to rescue the feline, but not without a groan-worthy “cat-tastrophe” joke.

What most moviegoers will not realize is how close this scene was to an actual disaster. With the new $36 million City Hall built just four feet behind the old one, engineers Mark and Doug Loizeaux of Controlled Demolition, Inc. had no room for error. It took them nearly ten months to meticulously plan the implosion so that the charges placed inside key pillars would drop the building at an 8 to 10 degree angle to the east, toward Orange Avenue and away from the new building. The Loizeauxes’ calculations were so precise, they said they could predict where the rubble would land within 10 feet. Even so, they still furnished a $20 million insurance policy to cover the safety of the new City Hall.

In addition, the demolition team had to coordinate with special effects crews to create the look of a classic Hollywood explosion. An initial, bright flash was followed by 4,000 pounds of exploding glass, cork, and paper before the bottom four floors erupted into flames. The entire sequence, which utilized 400 special effects charges, had to be perfectly timed with the implosion, and there was only one chance to get it right. As Mark Loizeaux told the Orlando Sentinel at the time, “It’s a demolition ballet. What we’re trying to do is choreograph what the principal dancer, the building, will do.”

On October 24, 1991, the evening of the implosion, nearby office towers hosted exclusive implosion parties, and thousands of people gathered along Orange Avenue and other vantage points outside the six-block safety zone to watch the spectacle. When the big moment finally came, the long months of planning and preparation paid off; the 33-year-old building collapsed in less than six seconds, with not a single scratch to the new City Hall.

Released in 1992, Lethal Weapon 3 was a box office success. For observant viewers, there was also one final Easter egg – a cameo of Orlando’s mayor at the time, Bill Frederick. Playing a member of the bomb squad who arrives moments after the explosion, Frederick claps and gives the two heroes a “Bravo!” Though delivered sarcastically, his line is a fitting conclusion to this singular moment in Orlando’s history, now immortalized on the silver screen. 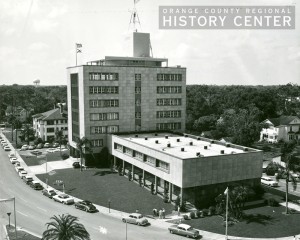 Constructed in 1958 under Mayor Bob Carr, the old Orlando City Hall was replaced by the current City Hall building in 1991. To help offset the cost of the demolition, the City of Orlando sold film rights of the implosion to Warner Brothers for $50,000.

Your ticket for the: Orlando’s Lethal Weapon Cat-Tastrophe