How They Rolled 100 Years Ago 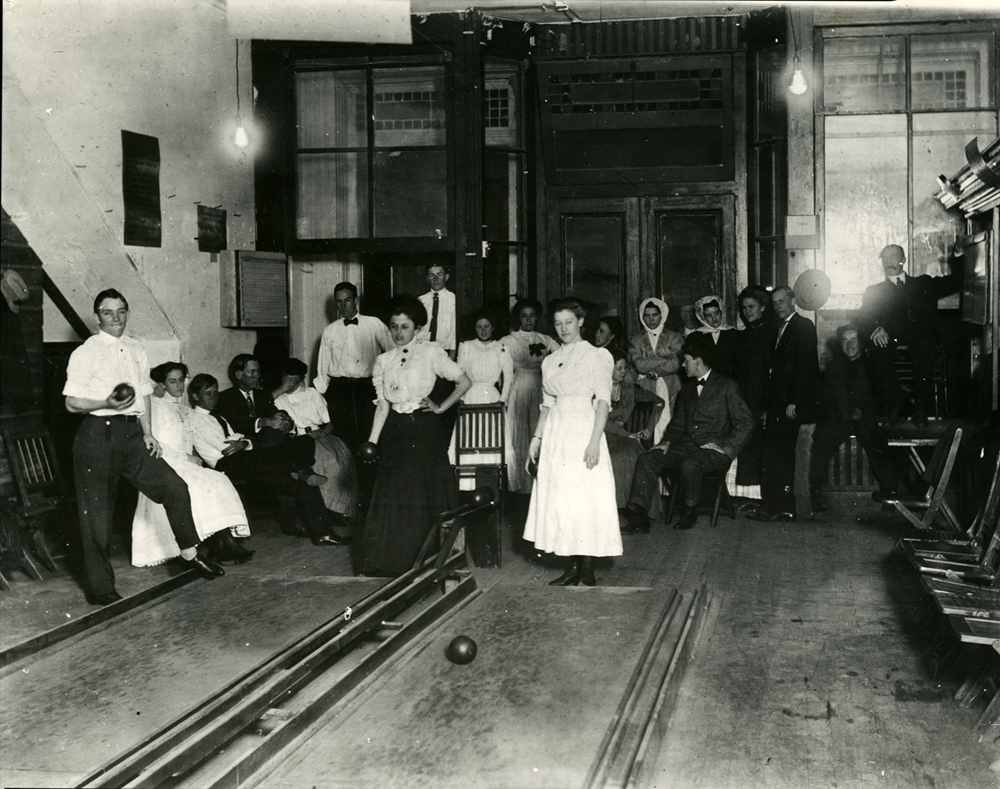 Van Brunt’s advertisements claim that his alleys were almost constantly filled with adept women bowlers. This photo shows Augusta Wright (left) and Elizabeth Branham (right) bowling at Van Brunt’s alley in the 1910s. The owner himself sits in a chair on the far right. Photo by T. P. Robinson.

In the early twentieth century, a new sport was introduced to downtown Orlando. On April 9, 1912, the Orlando Evening Star declared, “Nothing can be more health giving than this amusement, for every muscle in the body comes into play, the body learns to bend and sway to the swing of the arms, and the eye is tutored into the quick watchfulness and accuracy that will serve in good stead all through life, while every drop of sluggish blood in the body is wakened into a new and vigorous current.”

This miraculous sport was called bowling.

Outdoor bowling, or lawn bowling, was brought to America by early European immigrants, including the British, Dutch, and German. During the 19th century, the game migrated indoors and started to become popular with a wide audience, from the average person to the enormously wealthy. There were many variations on the game, but by the late 1800s, bowling clubs started adopting standardized rules.

When W. M. Van Brunt opened what is believed to have been Orlando’s first indoor bowling alley around the end of 1910 or beginning of 1911, the sport was still new to many Americans, but its popularity was steadily growing. The first bowling leagues and national tournaments were organized during this period. At Van Brunt’s alley, the game probably would have been played with a hard rubber ball, which replaced wooden balls in the early 1900s. A pinsetter, also known as a “pin boy,” would have been paid to reset the pins by hand and return the balls to the players.

In 1911, the alley was located at the corner of Main (present day Magnolia Avenue) and Pine Streets. There were four lanes where both men and women enjoyed this new entertainment. Initially associated with gambling, bowling had become socially acceptable for women over the past several decades as the sport developed a more reputable image. The Orlando Evening Star called Van Brunt’s bowling alley a “beautifying” place, “clean as a parlor,” where “nothing is allowed… that is not courteous and polite.” The author concludes that “ladies will find the new bowling alley a safe and delightful place to visit.”

Van Brunt frequently touted the health benefits of bowling, claiming that it was good exercise not only for the muscles but for the liver and the mind as well. As he stated in the Orlando Evening Star on May 17, 1913, “Don’t ‘pin’ yourself to the idea that bowling is not good exercise…”

Open from 9 a.m. until late in the evening, the alley was also a place to socialize. Numerous bowling parties were held at the alley, including birthday celebrations. Partygoers would bowl in pairs or individually. On one occasion, the best bowlers received prizes – a two-pound box of bonbons for the best woman bowler, and for the man, a smoking set including matches, a corn cob pipe, and a bag of Bull Durham tobacco.

By 1913, the alley had moved to 35 West Church, and by 1915 it had moved yet again to West Pine Street opposite the Grand Theater (between Orange Avenue and the railroad tracks). Although Van Brunt’s alley probably closed in the latter half of that same decade, the sport of bowling was here to stay.

Your ticket for the: How They Rolled 100 Years Ago

How They Rolled 100 Years Ago