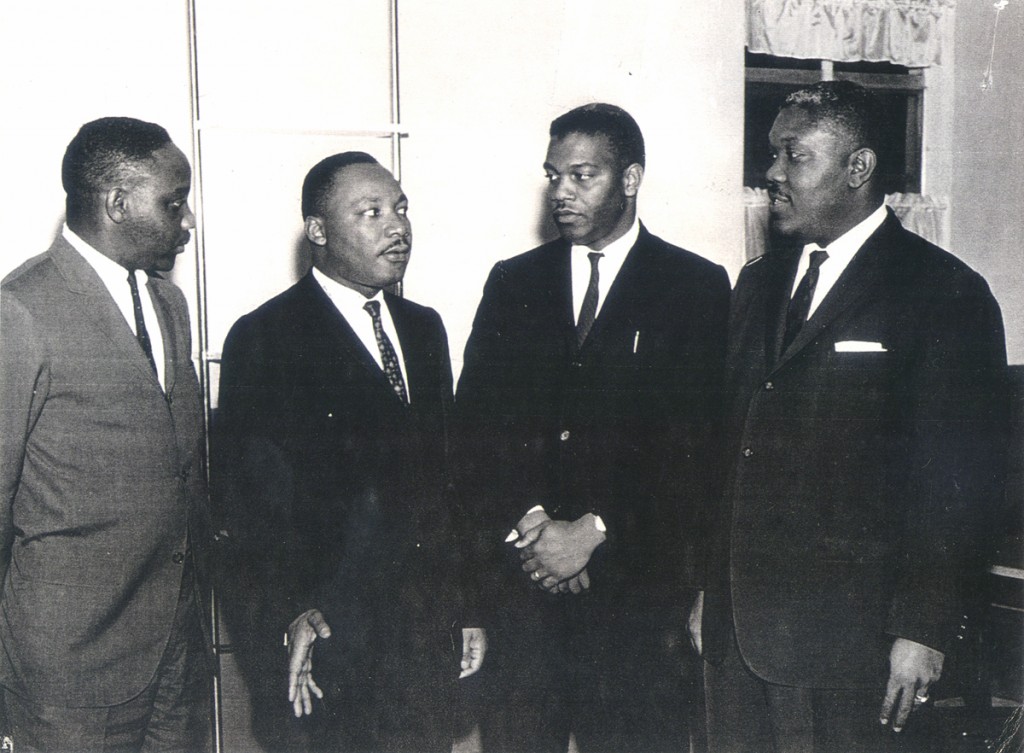 Dr. Martin Luther King Jr. (second from left) talks with community leaders William Lewis (from left), Norris Woolfork, and Willie James Bruton (for whom Bruton Boulevard is named), during a break in workshops held at Shiloh Baptist Church in Orlando on March 6, 1964. King spoke at Tinker Field later than night.

On March 6, 1964, Dr. Martin Luther King, Jr. made his one and only trip to Orlando to give a speech at Tinker Field. More than 50 years later, the Collections Department at the Orange County Regional History Center is searching through the collections for footage of that historic visit.

With the help of the archive, especially a notebook with a handwritten account of the Civil Rights movement in Orlando from the Jim Perry Collection, we are able to piece together a narrative surrounding Dr. King’s visit. Jim Perry was the NAACP Youth Council president at the time of Dr. King’s visit and was heavily involved in the Civil Rights movement from 1958 to 1980.

The hopes of desegregation were high following President Kennedy’s proposed Civil Rights legislation, which he announced to the public on June 11, 1963. However, in the wake of President Kennedy’s assassination, efforts to end segregation stalled for Orlando in 1964. The Rev. Curtis J. Jackson, pastor at the Shiloh Baptist Church and NAACP Youth Council adviser, told Perry and the rest of the council that if the City of Orlando refused to change, he’d be happy to invite his good friend Dr. Martin Luther King, Jr. down. Jackson wasn’t bluffing; he and Dr. King had attended Morehouse College together.

In fact, Jackson had already invited Dr. King to Orlando once before. In a September 7, 1962, letter to Jackson, Dr. King had to decline the invitation to visit in January 1963 due to engagements in Washington and Oakland, California. In that letter, Dr. King mentioned that he hoped “it will be possible to serve you on some other occasion.”

That “other occasion” had arrived. With progress to integrate the city slowing, especially in regards to local swimming areas, Rev. Jackson again contacted Dr. Martin Luther King, Jr. According to Perry’s notes, “Everyone was surprised because he was so busy. Word quickly spread that Rev. Martin Luther King was coming to Orlando.”

In addition to speaking at a rally, Dr. King was scheduled for a workshop at the Shiloh Baptist Church. According to an Orlando Evening Star article, Rev. Jackson, the area president of the Southern Christian Leadership Conference, expected more than 200 ministers from the black community throughout Florida to attend. The workshop was split into two sessions, one in the morning and one in the afternoon. Between the two sessions, Dr. King planned to speak with the mayor.

Mayor Bob Carr, Dr. King, and a delegation from the black community met that afternoon at City Hall. Perry describes the meeting as having “very tuff [sic] and frank talk of the conditions in Orlando. Rev. King made it clear that he would come back if things did not change in Orlando. Mayor Bob Carr asked Rev. King to give him time, that he would put together a Bi-Racial Committee to solve problems and end segregation in the city.” Perry recalls Mayor Carr forming an inter-racial committee after Dr. King’s visit, however this committee already existed. It is possible that what Perry remembers as the creation of the Inter-Racial Advisory Committee was actually a change in how much authority the committee was given after Dr. King’s talk with Mayor Carr.

After meeting with the mayor, Dr. King returned to Shiloh Baptist Church for the second workshop session and met with youth leaders including Jim Perry. It was at this time that Perry “was Blessed to take a picture with him.” According to Perry, Dr. King asked the youth leaders about the local community, its problems and what they would like to see changed. He then asked them to lead a freedom song at the rally and, of course, they eagerly agreed.

That night, Dr. Martin Luther King, Jr. spoke from the pitcher’s mound at Tinker Field to a crowd of about 2,000. For members of the black community, the rally marked the first time they were allowed to sit in the “whites only” grandstand. Many residents in Orlando can still recall from first-hand experience what Perry described as “a powerful speech that moved everyone.” 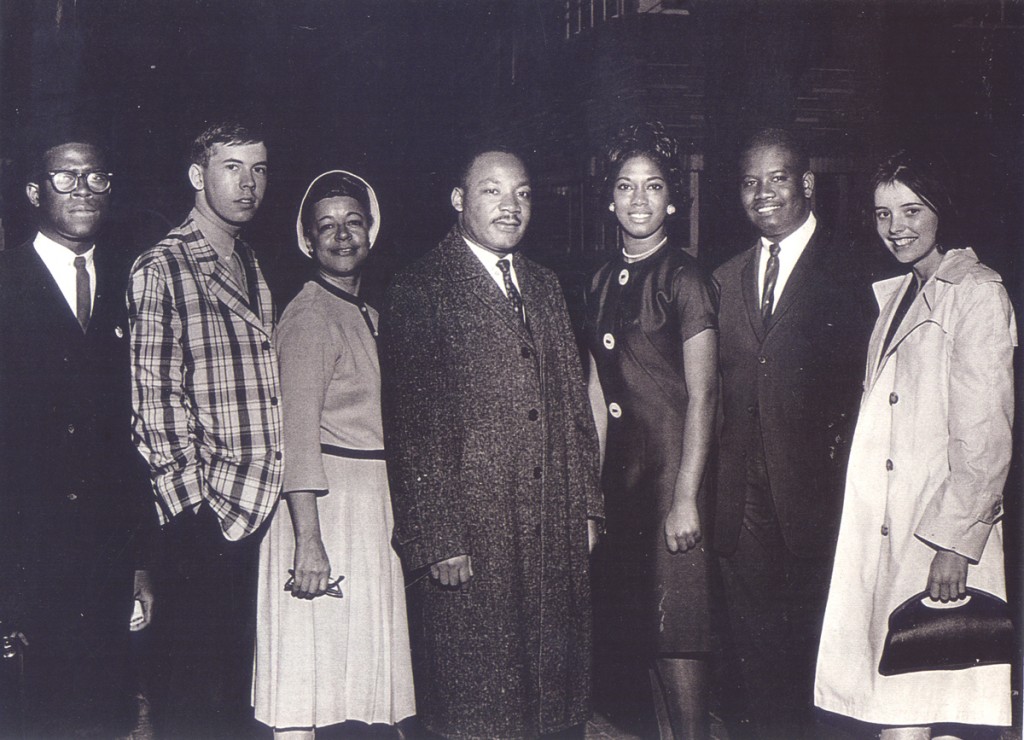 Dr. King in the Media

The Civil Rights movement was such a heated subject at the time that most media outlets did their best to down play or completely omit any news that broached the subject. In a March 17, 1960, article, The Corner Cupboard, an independent Orlando newspaper, accused local media of suppressing news of sit-downs in the area. The article read, “The Corner Cupboard has no desire to encourage this type of disorder, however mild,” but added, “it does feel that readers are entitled to know what is going on so close to home.”

Dr. King garnered more attention from the papers than area sit-downs, but it could be said that his news coverage in Orlando was not worthy of someone recently named Time magazine’s “Man of the Year”. On March 7, Orlando Sentinel’s Buck Liedel published an article recounting the speech at the rally and the workshop at Shiloh Baptist Church. The Orlando Evening Star ran a few articles as well, one of which contained the two photos of Dr. King at Shiloh Baptist Church. None of these articles were featured prominently in their publications.

Dr. King also appeared on Channel 9’s evening news on March 6. According to the news script, Newsline’s Mark Chamberlain talked to Dr. King at Shiloh Baptist Church and a one-minute-and-10-second portion of his speech was aired. Dr. King’s appearance on television that night may be due in large part to Joseph L. Brechner, owner and founder of WFTV-Channel 9 News. Brechner was a pioneer in broadcast and deeply committed to a fair, honest and compassionate portrayal of the Civil Rights movements in Orlando. The research center housed in the Orange County Regional History Center was founded in his name, and his collection there houses the Channel 9 news scripts along with much more. 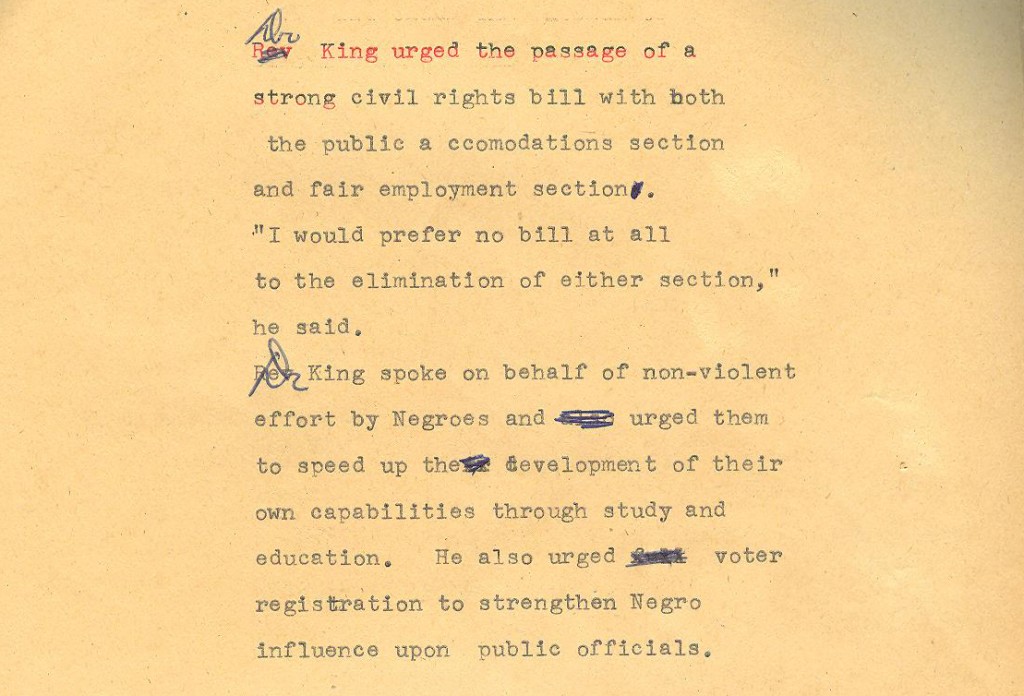 An excerpt from the Channel 9 news script containing a summary of Dr. King’s speech along with a quote.

Dr. King in the Collection

Two photos, a notebook from Jim Perry, and a news script are the only traces of Dr. King’s visit in the Historical Society’s collection. Maybe. The aforementioned Channel 9 news script may reference a reel housed in the collection’s more than one-million-linear-feet of footage. Brechner donated his collection of scripts and film in 1983, shortly before he sold Channel 9. Boxes upon boxes of news scripts and more than 1,600 reels of film were delivered with no inventory and no way to connect a script to its correlating reel.

Other large collections of news reels may hold a glimpse of Dr. King at Tinker Field, such as a donation from WESH-TV Channel 2 from 1982. These boxes and reels were received in a similar fashion; unmarked, unidentified and un-inventoried. Dr. King is a veritable needle in a needle stack.

This is one of the many current tasks for the Collections Department. With the help of staff and volunteers, the film collection must be combed through, inventoried and hopefully someday digitized. Even Channel 2 reporter Greg Fox has rolled up his sleeves, donned a pair of nitrile gloves, and joined in the work of hauling and searching through boxes. We can only hope that our search isn’t in vain; that Dr. King at Tinker Field wasn’t hidden away in a newsroom filing cabinet before the rest of Channel 9’s inventory was delivered to the Historical Society. If he is in the collection, then we will find him eventually. 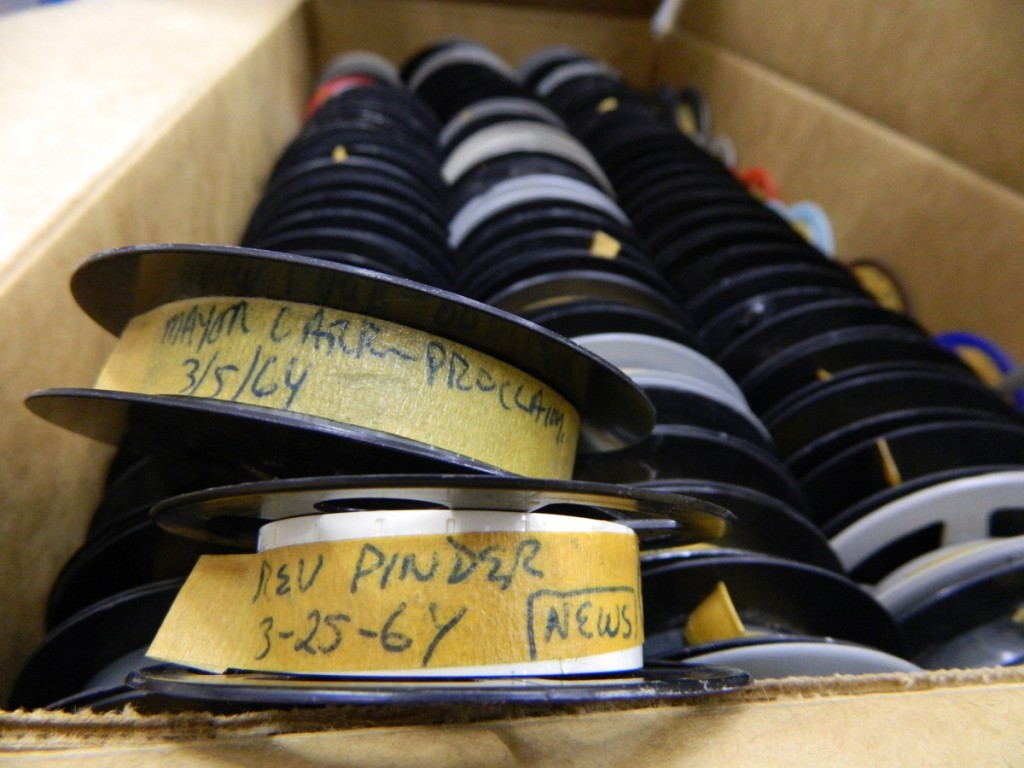 One of many boxes full of film at the History Center. Two reels labeled “Mayor Carr – Proclaim, 3-5-64” and “Rev Pinder, 3-25-64” are examples of footage that comes close to finding documentation of Dr. King’s Orlando visit.

Your ticket for the: Searching for Dr. King