Becoming Florida: Discovering the People of Our State’s Past 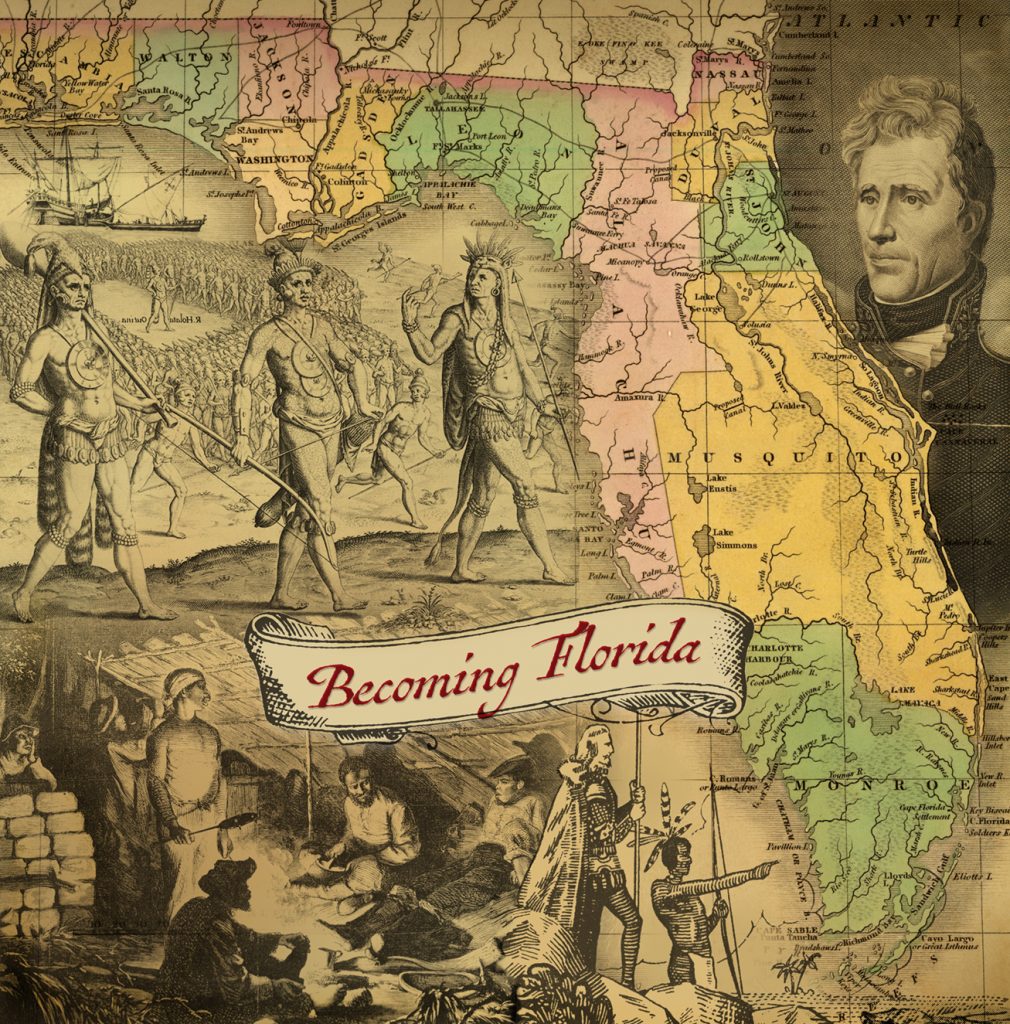 The year 2021 will mark 200 years since Florida’s American era began. Join us as we explore the histories of the people who inhabited Florida before it became a United States territory.

People likely first arrived in what is now known as Florida more than 14,000 years ago. Native people hunted, fished, and developed communities. By the time of the Spaniard Ponce de León’s arrival in 1513, Florida was home to numerous indigenous groups, each with their own cultures and way of life.

The Spanish arrived seeking gold and land to claim for Spain. After numerous failed expeditions, they gave up the interior of the region and established their first permanent settlement: St. Augustine. They then established Catholic missions in an attempt to convert indigenous people to Christianity, but the Spanish mission system ultimately disappeared as the native population dwindled due to disease, were killed in raids, or were taken north and enslaved.

Additionally, the British began to colonize the Atlantic coast, with Spain, which offered refuge to enslaved individuals. This first period of Spanish control over greater Florida lasted until the end of the Seven Years’ War in 1763, when the British took possession of Florida. The indigenous population had continued to decline, and by the time the British took possession, most of Florida’s remaining indigenous people left with the Spanish, never to return.

British control only lasted until the end of the American War for Independence in 1783. The British separated Florida into two territories: Pensacola became the capital of West Florida, and St. Augustine was capital of East Florida. The British established peaceful relationships with the Creeks and Seminoles, who would later prove to be important allies during the Revolutionary War. They also focused on developing the colony by offering land grants, developing roads, and producing goods for export.

Many British settlers brought enslaved Africans to work on their plantations, expanding the role of slavery in the territory to the level it had under Spanish rule. As a relatively new colony, Florida remained loyal to the English crown and did not join the 13 colonies seeking independence. By 1781, the Spanish did invade and conquered West Florida by the end of the war.

Spain took control of Florida for the second time in 1784, when the Treaty of Paris went into effect, recognizing American independence. Spanish control was short-lived, because the United States was now interested in acquiring the territory, which would give them control of the Mississippi River. Moreover, Spain struggled to bring settlers to the region and defend its northern border. The Spanish offered enslaved people who escaped from the southern colonies freedom in Florida if they adopted Catholicism and agreed to fight for the Spanish crown. This created tension between the Spanish and the United States, which ultimately resulted in the Spanish reversing the policy. But those seeking freedom still came to Florida and established themselves among the Seminoles.

In May 1818, Gen. Andrew Jackson invaded Spanish West Florida in an effort to prevent further raids by the Seminoles against white settlers along the United States border regions and recapture enslaved individuals living among the Seminoles. Despite orders to not endanger the Spanish in any way, Jackson captured two Spanish forts, and his act of war against the Spanish was met with nothing but protests.

Shortly after his invasion, serious discussions continued about finally ceding Florida to the United States. The result, the Adams-Onís Treaty (1819), went into effect in July 1821, making Florida a United States territory. Up to that time, 200 years ago, the land called Florida had seen cultures rise and fall, and thousands of years of human history had already occurred.

This year’s theme of our Brechner Speaker Series, “Becoming Florida,” is an exploration of the histories of the people who inhabited Florida before it became a United States territory.

(view recordings at links below)

Modern by Tradition: Innovation and the Transformation of Seminole Culture
Recorded Sunday, April 18

Tragedy and Survival: The Freedom-Seeking Peoples Known as Black Seminoles
Recorded Sunday, May 30

Your ticket for the: Becoming Florida: Discovering the People of Our State’s Past

Becoming Florida: Discovering the People of Our State’s Past