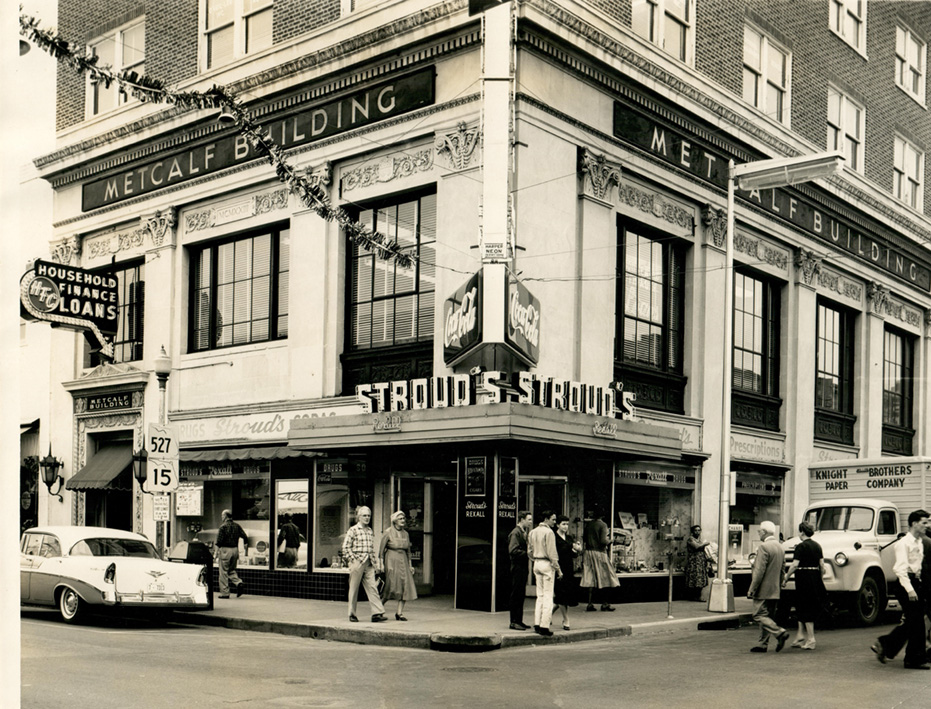 Stroud’s Rexall Drugstore was located on the corner of Orange Avenue and Church Street in the 1950s. This was the site of the sit-in demonstration by eleven Black students on March 9, 1962.

“For an appetizing meal or snack, visit a Woolworth’s lunch department.” In the 1950s, this was a familiar advertisement readers would see in their daily newspaper. However, though not specified, it was also understood that this invitation did not extend to everybody. In 1960, four Black students from North Carolina A&T State College were refused service at Woolworth’s all-white lunch counter in Greensboro, North Carolina, because of their race. When asked to leave, they refused, and their sit-in demonstration sparked a nationwide protest that would be felt in segregated spaces all over the county. Even here, in downtown Orlando .

Although many sit-ins were organized by college students, locally, high school students in groups such as the Liberal Religious Youth Group and the NAACP Youth Council, with the support of well-respected Black leaders, were often the main organizers. After several successful protest boycotts at the Big Apple City Market, Winn-Dixie, and Publix, the effort to fight segregation made its way downtown.

On March 5, 1960, two demonstrations were carried out simultaneously by Black Orlandoans. Around 11:30 a.m., six youths entered S. H. Kress Co. on 122 S. Orange Ave., and six others entered F. W. Woolworth Co., directly across the street. Both groups quietly sat on stools at the lunch counter but were denied service, as the store personnel chose to close upon the demonstrators’ arrival instead of serve them.

Both demonstrations were carried out without violence. Several days later on March 9, about thirty-five students went back to these two stores, in addition to McCrory’s, to again protest their segregationist practices. Again, the lunch counters were closed upon the students’ arrival and reopened shortly after their leaving.

Demonstrations continued until September, when in an effort to avoid the type of violence and unrest happening in other Florida cities like Tampa and Jacksonville, some downtown Orlando merchants agreed to open their lunch counters to Black patrons during prearranged hours.

This decision was not well received by the city’s White Citizen’s Council, and its members threatened to boycott the stores that implemented this policy. Nonetheless, it happened. Although this was a step toward equality, progress was slow, and several years later Black citizens were still working to desegregate downtown businesses.

On March 9, 1962, eleven Black students were arrested on charges of disorderly conduct for simply refusing to vacate a whites-only lunch counter during a peaceful sit-in demonstration at Stroud’s Rexall Drugstore on Orange Avenue and Church Street. They spent that night in jail and were held on bail of $250 each. The Black community gathered the money for the students to be released the following morning.

It was clear from the persistent actions of these students that they were not content to stay on the sidelines in this fight. Their pursuit of equality proved to be effective, when on June 6, 1963, Orlando Mayor Bob Carr announced during a speech that chain and drugstore lunch counters in downtown were to be integrated, as well as some other public spaces.

This sit-in movement, although small compared with other cities, was instrumental in paving the way for future civil rights victories in Orlando.

Your ticket for the: Downtown Orlando’s Civil Rights Sit-Ins