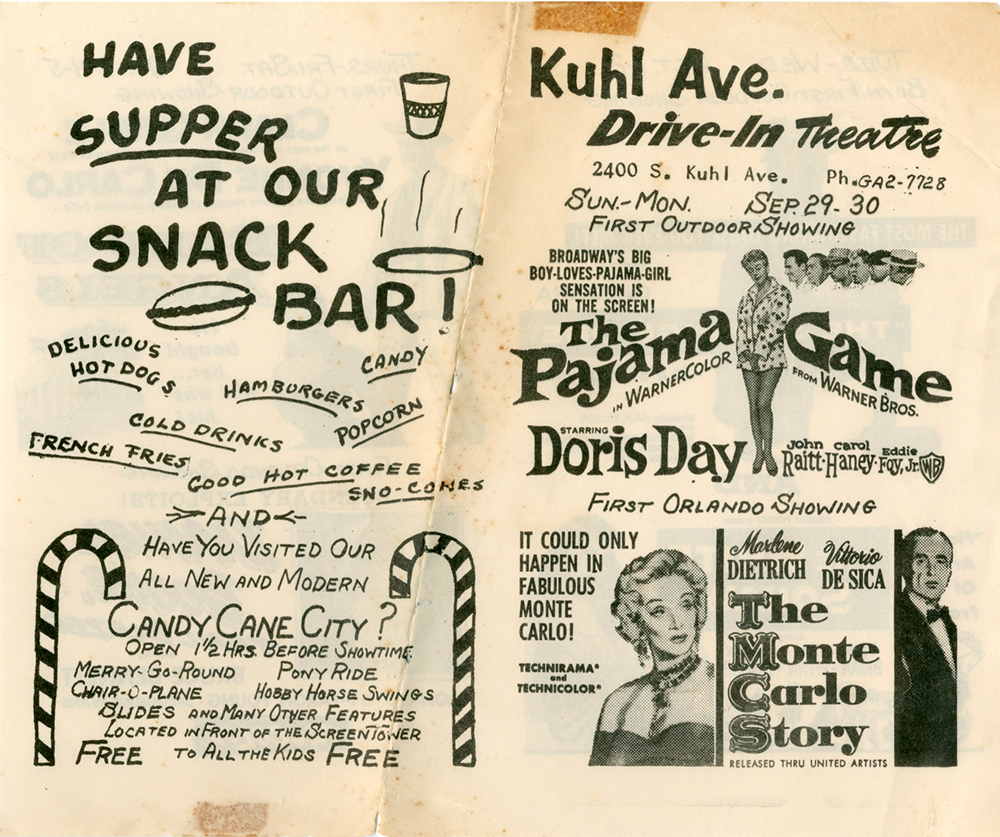 Across the nation, there is one industry that appears to be flourishing during the pandemic: drive-in movie theaters.

Orlando’s first drive-in movie theater opened on February 7, 1940, at 1001 South Orange Blossom Trail. Originally called “The Drive-In Theater” and later renamed the Orlando Drive-In, it was one of the first of its kind in the state.

The location featured graded parking for around 300 cars, giving every patron a perfect view, with individual speakers at each space. At 42 feet long and 60 feet high, the screen was reportedly four times larger than the typical movie screen of the time (Orlando Sentinel, February 4 and 8, 1940).

Attendants assisted moviegoers with purchasing tickets, served soft drinks car-side, and cleaned patrons’ windshields to give them a crystal-clear view. The theater advertised the convenience of never having to get out of your car, so that patrons could eat, smoke, and gossip in private as well as dress however they pleased. Pajamas were welcome!

On opening night, ticket holders viewed a Mickey Mouse cartoon and a sports reel, as well as the main attraction: Vivacious Lady, a 1938 romantic comedy starring Ginger Rogers and Jimmy Stewart. According to the Orlando Sentinel the following day, nearly 3,000 people attended. One of the best parts of the experience, the reporter noted, was that unlike a traditional movie theater, “pests who sit in the backseat of your car and heckle a movie which you are enjoying can be told to get out and walk home.”

Manager Allen F. Horton later described the early days as being a do-it-yourself affair. The speakers were housed in homemade plywood boxes, and the projection equipment was intended for an indoor theater and modified to work outdoors. Movies were shown every night at 7 p.m., rain or shine. Supposedly a woman once called to ask if the rain would make the technicolor bleed all over the screen (Orlando Sentinel, February 13, 1955). Tickets were 25 cents and free for children. According to Horton, the drive-in thrived over the next 15 years by appealing to families with kid-friendly movies and cartoons.

It also began hosting church services, an idea borrowed from the Winter Park Drive-In. Every Sunday morning, Dr. Fred E. Stinson, minister at the Christ Methodist Church in Orlando, would preach to a crowd of worshipers listening in their cars, a practice that has recently been revived due to social distancing.

The Orlando Drive-In closed in the mid-1970s. Although Central Floridians once had their choice of drive-ins in, by 1993 only three remained (Orlando Sentinel, November 25, 1993). Several factors contributed to their decline, including rising real estate values and the increasing popularity of televisions, VCRs, and video rentals. Today, the closest drive-in theaters are in Lakeland, Dade City, and Ocala, all of which have been in operation for more than 70 years.

Your ticket for the: Orlando’s Pioneering Drive-In Movie Theater