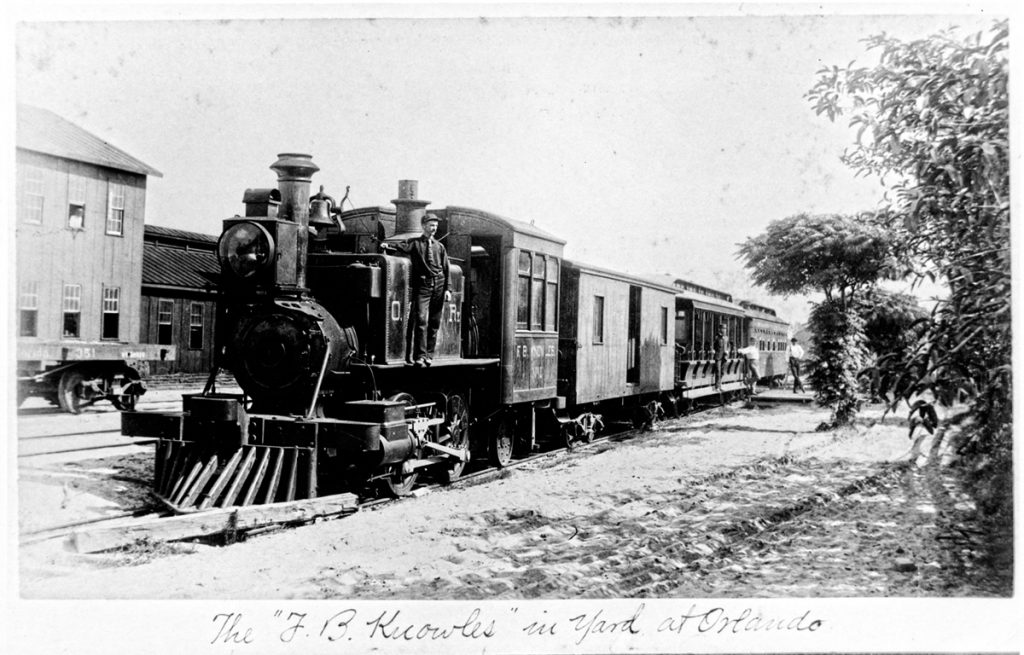 Orange County pioneer Kena Fries wrote of change in Orlando from the city’s first beginnings in her 1938 publication, Orlando in the Long, Long Ago . . . and Now. In Orlando: A Centennial History, published in 1977, Eve Bacon observed that “change was the keyword for the last half of the 1950s.” T.D. Allman opined for National Geographic in 2007 that “Walt Disney’s utopian dream forever changed Orlando, Florida, and laid the blueprint for the new American metropolis.” In “Beyond Disney,” Allman considered the explosive growth of Orange County’s population and the dramatic expansion of the physical city of Orlando after Disney World opened in 1971.

Historians define history as the study of change over time. Such change often comes gradually and is little noticed, but occasionally in the history of any place, a catalyst, or singular event, will produce sudden and dramatic change.

While such change propels a place forward, it sometimes brings unexpected consequences. The change Disney created in Orlando surely qualifies as the most dramatic and complete, with the most far-reaching consequences, but it was definitely not the first. 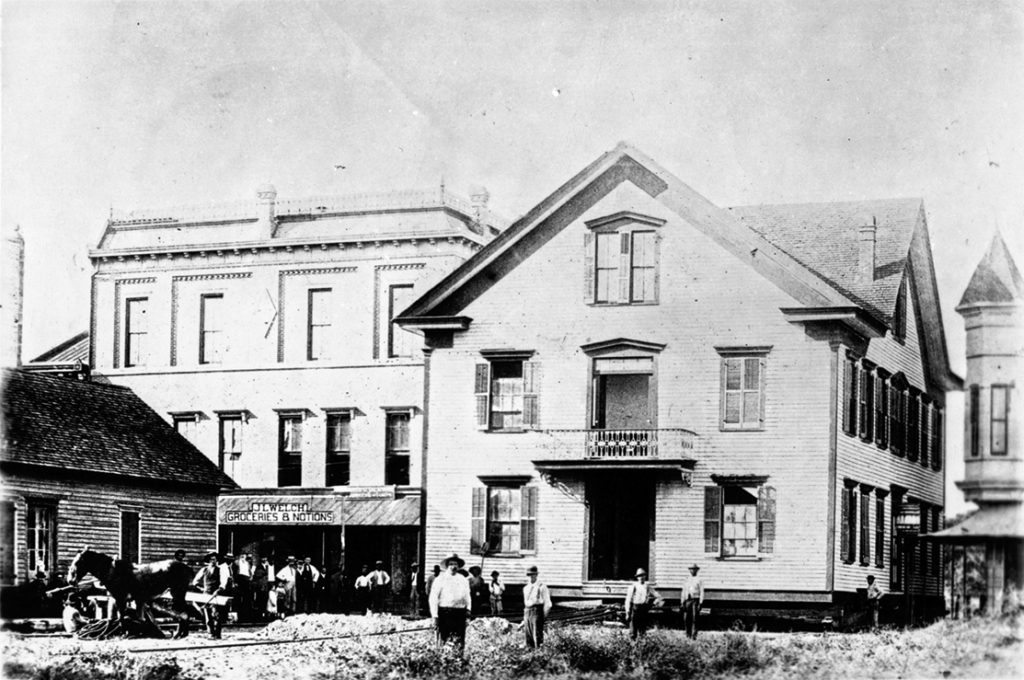 Orlando became a town in late 1856, when voters chose the nameless scattering of log cabins in the woods around Lake Eola as the new seat of Orange County government. The place acquired a name and property for a courthouse in 1857, and soon a hotel was added to accommodate the visitors expected to bring their business before the county court.

Perhaps the only unintended consequences of the voters’ decision came with rowdy cow hunters’ visits to town and the loss of the courthouse to a fire just before an 1868 cattle-rustling trial. 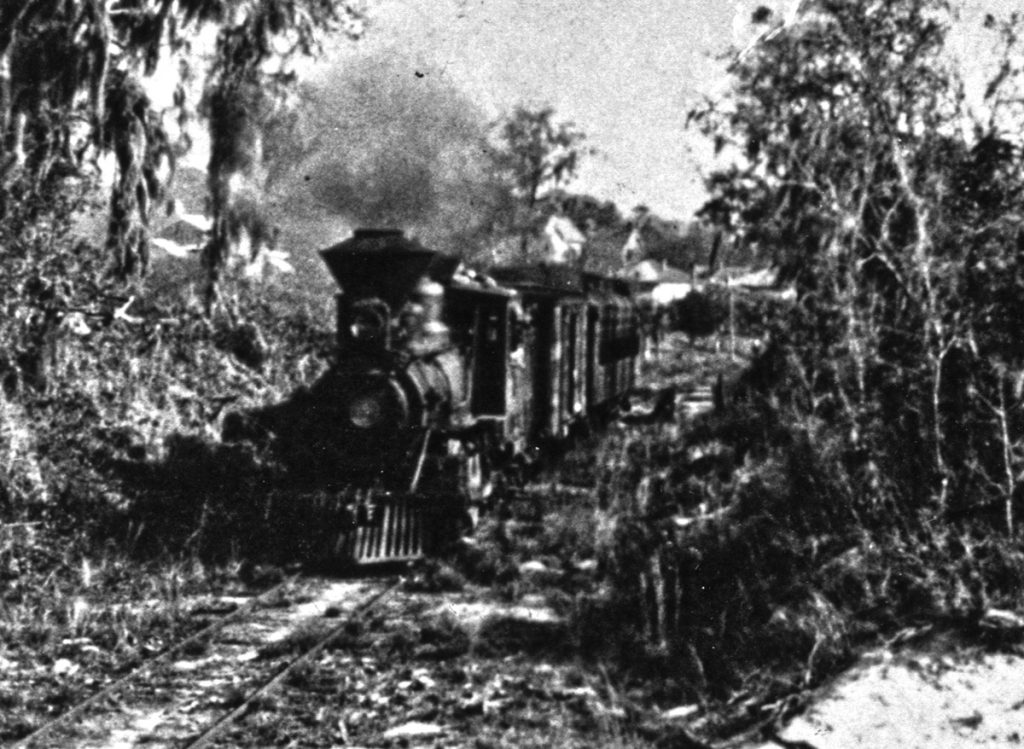 No rivers provided transportation to Central Florida, and road-building proved difficult in the swampy terrain, inhibiting Orlando’s growth before the arrival of the first railroad from the north in 1880.

The city’s first economic boom came with the railroad. In just four years the population rose from 200 in 1880 to 1,666 in 1884. By 1886, 2,000 people lived in Orlando. A boon for tourism, the cattle economy, and most of all, the citrus industry, the pivotal event brought an unexpected and permanent side effect. The railroads laid their tracks along the western side of Orlando’s downtown. The hotels and commerce moved closer to the railroad, causing the center of the city to shift westward from Main Street and the courthouse square to Orange Avenue.

In the 1890s, Orlando’s economy remained agricultural, based on large herds of cattle and acres of tropical fruits, including grapes, pineapples, and oranges. Record cold in the winter of 1894-1895, a negative event in itself, brought a lasting change to Orlando. Freezing temperatures destroyed the citrus still on the trees, and then killed the trees themselves.

The economic setback lasted for more than a decade, but the change in the citrus industry continued for a century. Many individuals owned citrus groves, some a few acres and others many hundreds of acres. Few small growers had the capital to wait the seven years required for a new tree to bear fruit, and when the large growers approached them with cash, they sold their acreage.

A few large growers thus came to dominate the citrus business. Thousands of acres of groves surrounded the city, and in the 1920s twelve great packing houses lined the railroad in downtown Orlando. More than half of Florida’s annual citrus crop passed through Orlando on its way to market. 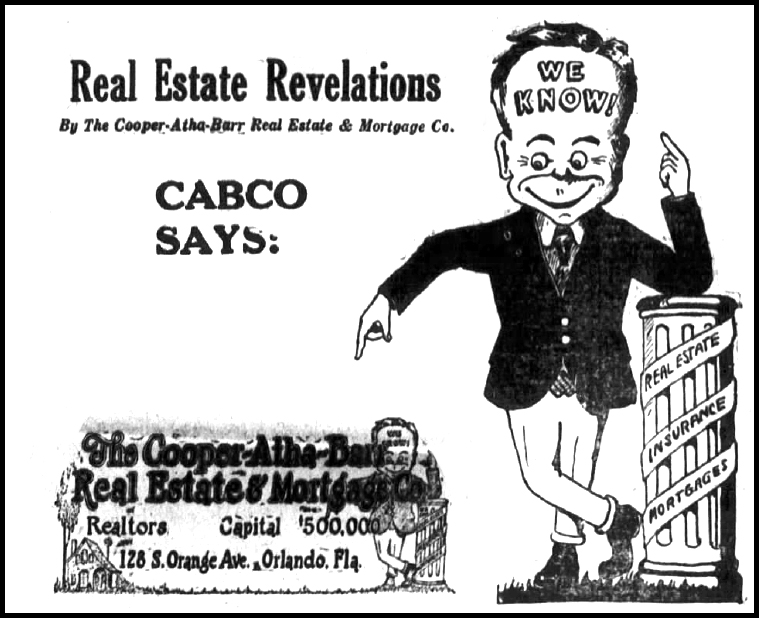 In the prosperity that followed World War I, tourists rushed to Florida in their new automobiles. Many stayed, and the influx of new residents led to the great Florida housing boom of the 1920s. It lasted less than a decade, but the frantic buying and selling of land and the furious construction of houses changed Orlando forever.

A consequence of the frenzy came with the Great Depression in the 1930s, when foreclosed houses and vacant subdivisions brought down banks and businesses, and the economy stagnated.

Prosperity returned in 1940 with preparations for United States involvement in World War II. Orlando Army Air Base replaced the Orlando Municipal Airport, manufacturing plants opened to produce war materiel, and soldiers arrived in the city for training. The government built housing for the military personnel, and Orlando residents found work in the new factories.

The economy revived, and the good times continued after the war. The military bases remained with the necessary personnel to run them, and soldiers who had trained in Orlando returned to live and work in the area.

Builders who had been able to keep their vacant subdivisions through the Depression, or who had bought land from failed developers, put up acres of inexpensive houses for the returning servicemen who wanted homes and families.

The population increased and spread farther from downtown. By 1950 Orlando’s population stood at 51,826.

The rapid growth brought its own consequences in the need for roads and parking lots. Shopping centers lured shoppers away from downtown stores with free parking, leading to the central city’s decline.

Interstate 4, in the planning stages in the early 1950s, represented possibly the most fundamental change of that or any other era. Its benefits to Orlando failed to materialize completely as the interstate system rushed travelers nonstop through the city. The highway enabled residential growth to spread even farther from the city, requiring still more roads.

The new aerospace industry brought many new residents to Orlando after World War II. In addition to the military bases and the industrial plants in Orlando, the development of the space program at Cape Canaveral on the Atlantic Coast provided employment for new arrivals.

Orlando’s most dramatic change came with the announcement in 1955 that the Glenn L. Martin Company planned to move its production and all its engineers to Orlando from Baltimore, Md. The missile-building company bought land near the Pine Castle Air Force Base, south of Orlando, for a new plant, and by the decade’s end more than 50 new industries followed.

Along with higher property values came the need for more roads and utilities, guaranteeing work for the Orlando Utilities Commission and Southern Bell Telephone. In 1958 nearly 3,000 people worked for the Martin Company in Orlando. By 1961, the company, then known as the Martin Marietta Corporation, was Florida’s single largest employer, with about 10,500 people working in 23 buildings south of Orlando.

Many of the 300 employees who transferred from Baltimore moved their families to new residential developments at Sky Lake and Pine Hills. The Martin employees introduced new ethnicities to the area, along with a greater need for Catholic churches. The Catholic
Diocese of St. Augustine created the new Diocese of Orlando, a new Catholic high school, and new Catholic churches for the incoming residents. 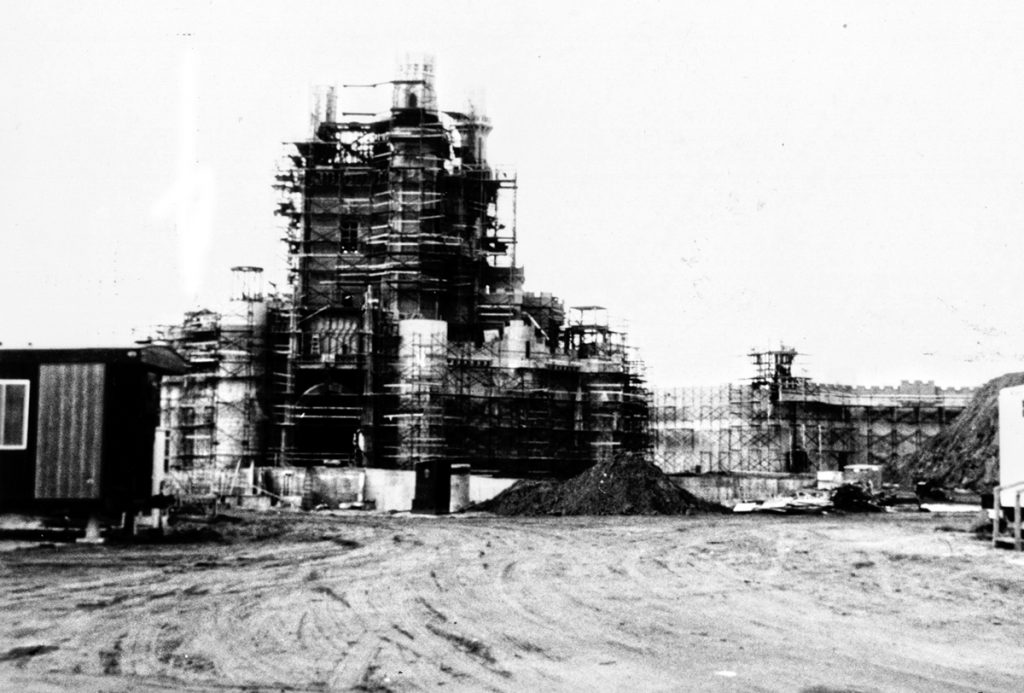 Tourism had always supplemented Orlando’s economy, but in 1971 Walt Disney World opened to unprecedented numbers of visitors, and tourism soon displaced agriculture. Freezes in the 1980s destroyed the citrus industry, and huge housing developments and hotel complexes took the places of the groves.

People moved to the area in overwhelming numbers, hoping to find work at Disney World. Between 1971 and 1999, Orange County’s population more than doubled, from 344,311 to more than 846,000. More theme parks followed Disney World, and in the year 2000 alone, Central Florida entertained nearly 43 million tourists.

The very success of Disney World brought consequences. The massive and rapid influx of people, both visitors and new residents, overburdened the region and its infrastructure. Highway construction lagged behind, and traffic congestion became legendary.

The new residents brought diverse ethnicities and religions to Orlando, changing the area’s demographic. Their low-wage jobs in hotels, restaurants, and theme parks could not support homeownership, making affordable housing a problem. Roads and facilities proved inadequate for the ever-growing numbers of tourists and residents. Still, more attractions opened, and more people came.

The change that is history continues between the pivotal events, and progress builds upon all that has gone before.

Just as the first settlement of the area depended on the military roads and forts left from the Second Seminole War, the success of Disney World happened only after the advances that came with World War II and the Martin Company.

By the time Walt Disney visited the area, two superhighways made access possible.

The theme parks have made Orlando an international tourist destination with a thriving economy based on consumption rather than production, and the next epic event must build from that reality and will generate change with unknown consequences. It will also begin with better transportation and a more diverse population.

Your ticket for the: Orlando Changes