Orlando’s First Hospital and the Rivalry That Transformed a Community 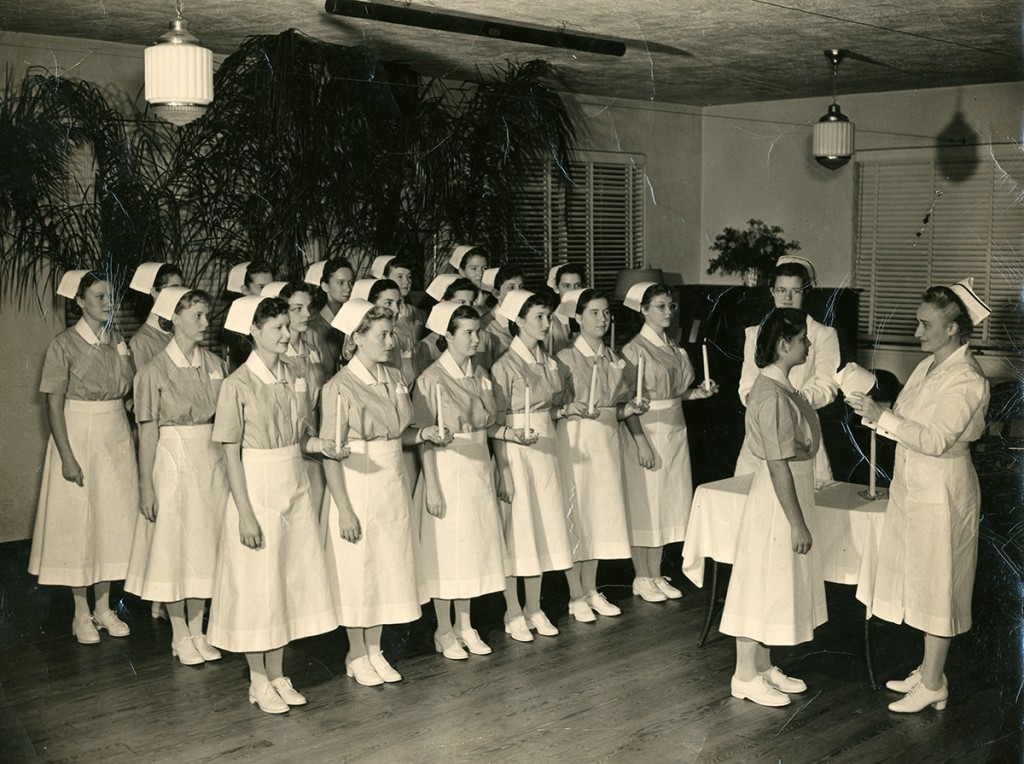 Being sick or injured in early 20th-century Orlando was a much different experience than it is today. If you could not afford to pay a doctor to make a house call, you might have found yourself in a lantern-lit hospital ward, cooled only with fans blowing over basins of crushed ice. Because of the oppressive heat, windows would be kept open even if you needed surgery, with nurses swatting the flies that wandered in. Orlando’s first recorded surgery was an appendectomy conducted on a dining-room table, with equipment sterilized in a wood-burning stove.

Orlando General Hospital, which has grown into Orlando Health, first opened Nov. 5, 1918, only weeks after all public gatherings closed for 10 days in October 1918 because of the influenza pandemic. (The Orlando area was spared from heavy casualties and counted only 10 deaths.) As part of Orlando Health’s centennial, History Center staff looked back at how far health care has come since the early 20th century. How did we get from candlelit operating rooms to the technically advanced health care system of today?

In 1892, a widow named Mrs. Phillard built seven four-room cottages along the north side of Anderson Street, between Delaney Avenue and Lake Avenue. However, according to Eve Bacon’s Orlando: A Centennial History, no one wanted to rent the units because “the site was so far from the business district.” Instead, Mrs. Phillard gifted the property to the
Cottage Hospital Association as a home for elderly women, forming the city’s first hospital.

Three years later, the Episcopal Diocese took over the Cottage Hospital, renaming it the Church and Home Hospital. Under the guidance of Bishop William Crane Gray, facilities expanded to support the needs of Orlando’s growing population. Additions included fully equipped operating rooms, wards, and private rooms, as well as a segregated building for African American patients. Homes for nurses and a chaplain were also built, with a separate laundry, dining room, and kitchen.

Meanwhile, Dr. R. L. Harris founded a tuberculosis sanitarium on the shores of Lake Estelle – the beginning of what would later become Florida Hospital. In 1906, Harris drew two prominent doctors to Orlando who would transform the medical community: Dr. C. D. Christ and Dr. John McEwan. Each eventually left Harris’ hospital to form their own private practices in downtown Orlando. 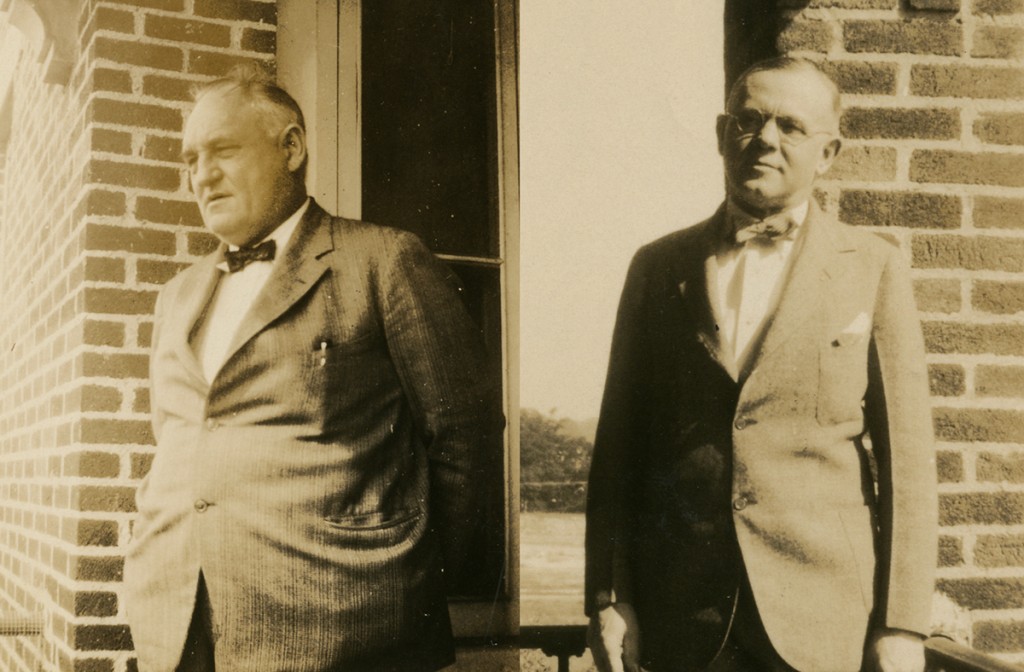 The era of Christ and McEwan

“Dr. Christ was very resourceful, but he was also very uncouth,” Dr. Charles J. Collins remembered in Ormund Powers’ 75 Years of Caring, a 1993 history of Orlando Health. Collins was an obstetrician who used to make rounds with Christ. “He had a lot of ministers as patients,” Collins recalled. “We would walk into a minister’s room and Dr. Christ would say, ‘Good morning you old G.D. hypocrite.’ But they all loved it. They loved him.”

In 1910, Christ founded one of the area’s first private sanitariums. When his practice outgrew its original location in the Guernsey building at 11 E. Central Ave., Christ opened the Orlando Sanitarium at the northwest corner of Magnolia Avenue and Robinson Street, which included a training school for nurses. He also constructed a three-story brick building outfitted with steam heat, a heated swimming pool, and a sunbathing area on the roof.

McEwan, on the other hand, built his own three-story, 20-room hospital at the southeast corner of Central Boulevard and Magnolia in 1911. The building still stands today and is currently occupied by the Stagger Inn.

McEwan garnered international recognition in 1912 when he performed a delicate operation at the Church and Home Hospital to remove the cancerous portion of a man’s windpipe. Years later, when McEwan had to undergo surgery himself, Bacon quoted him as saying, “After this when I remove adhesive tape from a patient, I am going to be a little gentler, in fact, I am not going to jerk the tape at all, nor pull it. I am going to remove it slowly and carefully. I don’t want any more adhesive tape pulled off me in a jerky or decisive manner!”

Christ and McEwan were fierce competitors. In addition to their private practices mere blocks away from each other, both doctors treated patients at the Church and Home Hospital, which was renamed St. Luke’s Hospital in 1915. But, despite their rivalry, the two doctors worked together when it counted. In one memorable incident, telegraph lineman E. A. Moore was struck by lightning while working on a pole along North Orange Avenue. Christ and McEwan both rushed the man to St. Luke’s, saving his life.

The two doctors also worked together to help form the Orange County Medical Society in 1908. The society’s meeting minutes paint a fascinating portrait of health care in the early 20th century. In addition to smallpox, common ailments included dengue, a mosquito-borne viral infection; typhoid fever, a bacterial illness spread through contaminated food and water; eclampsia, seizures caused by high blood pressure during pregnancy; and pellagra, a vitamin deficiency that can result in death if untreated.

By 1909, the society had adopted a standardized pricing system for common medical procedures. A prescription or advice at the doctor’s office cost a patient $1 to $10, while a procedure such as a hysterectomy or a laparotomy would be billed at between $100 and $500. Physicians often traversed Orlando’s sand roads making house calls, which cost $2 to $5 during the day or $3 to $10 at night.

St. Luke’s closed its doors in 1916. According to William Fremont Blackman’s History of Orange County, Florida, the rise of private sanitariums meant that most patients who could not afford medical care ended up at St. Luke’s. In the hospital’s first 15 years, more than half of its patients were unable to pay for their treatment. This, combined with the expense of the hospital’s rapid expansion, led to the closing of St. Luke’s, Orlando’s original pioneering hospital. 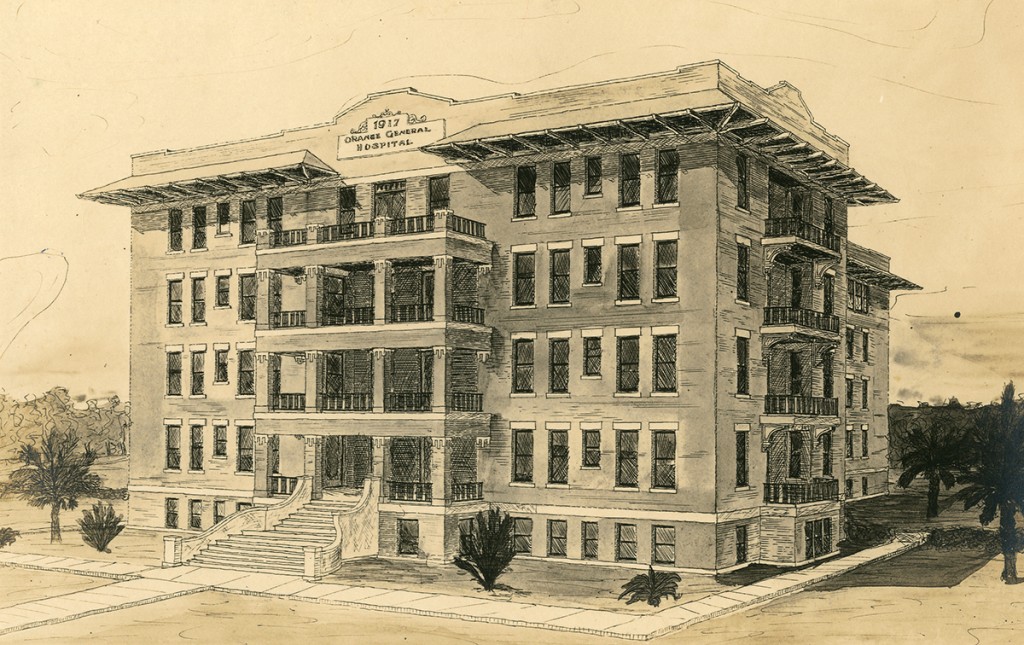 The loss of St. Luke’s spurred Christ, McEwan, and others to begin fundraising for the creation of a new, modern facility. Christ and McEwan both donated equipment, which was in short supply due to World War I, and undertaker Carey Hand offered the free use of his ambulance.

Dr. J. B. Callahan, the area’s only African American doctor and the person for whom Orlando’s Callahan neighborhood is named, organized a committee to raise money for the new hospital, including a ward for black residents. Callahan’s committee was composed of prominent African American residents – five women and five men who formed fourteen teams and raised more than $500 from members of the African American community. In today’s dollars, it was an astounding sum of more than $13,000.

When the new hospital opened in 1918 on what is now South Orange Avenue, the four-story structure, surrounded by orange trees, a cow pasture, and a dairy, was only partially furnished, with separate wards for men and women on the first floor and private rooms on the second floor. The hospital’s first patient was Ida Chiles, who gave birth to her baby boy by candlelight because there was no gas or electricity. This facility, named Orange General Hospital, was the beginning of what would become Orlando Regional Medical Center and Orlando Health.

Rivals who left a legacy

Christ and McEwan were two of Orange General’s most active physicians. According to Dr. Collins, each had assigned days of the week when they could operate, and no one else could operate on those days unless Christ or McEwan had no procedures scheduled by 5 p.m. the day before. They performed so many surgeries that they each had their own nurse who specialized in anesthesia, Mrs. Ida Ellis and Mrs. Graham.

Though they came together to help bring Orange General to life, Christ and McEwan’s rivalry never diminished. “When a doctor came to town,” Collins remembered, “he had to join up with either the McEwan side or the Christ side to make a living.”

Both men created a lasting mark on Orlando through their contributions. While Christ’s sanitarium closed because, according to Bacon, he did not pressure patients to pay for their treatment, he remained an important leader in the medical community. McEwan, meanwhile, served in World War I, returning to run the McEwan Clinic until his retirement in 1942. But perhaps the most important part of their legacies is the role they each played in founding Orange General – the seed from which Orlando Health would grow over the course of the next century.

Note: This article written by the History Center’s curator of collections, Lesleyanne Drake, for the Fall 2018 edition of Reflections magazine. It was the first part of a two-part history of Orlando Health.

Your ticket for the: Orlando’s First Hospital and the Rivalry That Transformed a Community

Orlando’s First Hospital and the Rivalry That Transformed a Community