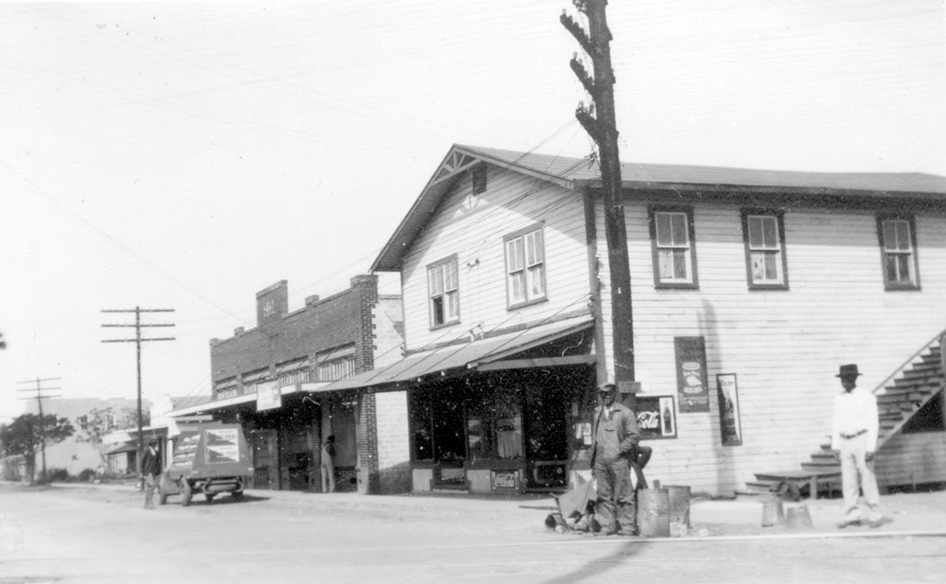 by Stephen Caldwell Wright
From the April 2003 edition of It’s About Time, the precursor to Reflections From Central Florida

Thomas lived in Goldsboro, a bustling all-black community west of French Avenue in Sanford. Founded in 1877, Sanford was well known as “The Gate City of South Florida” and prospered from its port, located on the St. Johns River, which empties into the basin known as Lake Monroe. Goldsboro, established in 1891, was a separate center of activity.  It had its own post office on 13th Street, the main artery of barbershops, beauty parlors, pool halls, restaurants, a movie theater, gas stations, churches, rooming houses, and private homes. If the City of Sanford had not annexed Goldsboro, there would have been two all-black incorporated cities in Central Florida—Eatonville and Goldsboro.

During the early 1960s, as Thomas witnessed the gradual disappearance of businesses along 13th Street, he also began to notice, connect, and decipher other changes around him. From his front yard, Thomas, the oldest grandchild, could stand and look across the field in which the children played and see the high school which sat on a slight hill. It was the school for the white children. Very fine houses, many of which were made of cement blocks, as was the new fashion, lined the streets surrounding the school. Walking past the school and turning onto Lake Avenue, Thomas often was made aware of definite changes in scenery. As he moved closer to home, the cement houses gave way to wooden frame houses, and the paved streets receded into dirt roads of thick, dull-gray sand. During the frequent Florida summer rains, the flooding water would rush through the green lawns on the hill and scurry down the dirt road and into the drainage ditches which fronted most of the houses below.

Because it seemed such a chore climbing the hill in the sweltering Florida sun, somebody from an earlier generation had called it “the hike,” and the word stuck. For Thomas and all the other children in his family, the hill was a symbol of a different life which Thomas often imagined was better. Despite how hot it got in the summer or how cold it got in the winter, it always seemed unusually carefree up on the hill, where wonderfully erect brick houses, always freshly coated with paint of various colors, stood in the middle of neatly clipped lawns of thick, green grass.

As Thomas’s thoughts often dwelled on the lives in the houses up on the hill, he also pondered his own surroundings, and his thinking would always begin with the house in which he lived—Preacher’s house.

It stood, like a cross in the midst of some deserted land, towering above the street and even above the house next door, which also was stout and tall. Preacher’s house was not that extraordinary, but it was just so damn noticeable. Standing two stories and weathered beyond repair, it leaned slightly to the left, as if, by the gentlest whim of some foreign or angry wind, the house might decide to crumble onto its side. After all, years of winds and rain had besieged the house and shaped its weathered, forsaken-looking face. On more than one occasion, it was the old big house by which some unsuspecting souls, traveling through the area and seeking a place for the night, the week, or the farm season, stopped to inquire if rooms were for rent. The extraordinary size of the house drew this kind of attention and more, but mostly more. The inquirers would be politely sent on their way—away from the family dwelling.

The old house painted a rather dismal picture for those who did not know its inhabitants. It sometimes provoked sympathy and laughter, and it probably would have prompted more of both if it had not been for the family, the people who lived there—that is, if the inhabitants had not been, by the accounts of all who knew them, so damn proud and such a good-looking, handsome family.

To Thomas, it seemed, with each year, the old, though weakening structure, toughened up and braced itself for another torrential onslaught from the seasonal tropical storms which plagued the state with punishing fervor. Thomas recalled the walls of the room in which he slept cracking with the wind and swaying in the thundering rain. He could still see, in his mind, the water seeping through the boards on the sidewalls, and he could remember watching the leaks in the ceiling as a parcel of water moistened through the wood, rolled into a ball, and transported itself, mysteriously defying the law of gravity, across the ceiling boards and finally deciding to become a drop, plopping itself into a pot or pan—strategically placed to keep the accumulation of water from seeping downstairs—or onto the blanket on the bed. As Thomas remembered, the leaking would soon become a lulling rhythm. After a long night, day would break, and the storm would be another memory soon to be added to the others that, through the years, had blown through.

Thomas had grown accustomed to the condition of the house and to the attention it drew. One source of attention, however, was particularly difficult for him to diffuse or to ignore. It came from his schoolmates.

The kids who roamed through the town to survey the damage after each storm always would make it their business to check on Preacher’s house. After each storm, tornado, or hurricane, those who lived in brick houses would come especially to see if Preacher’s house was still standing or leaning, as usual. It amazed them and even some of the adults (whom Thomas suspected probably sent the kids to see in the first place) that Preacher’s old ragged thing was still standing even though newer and stronger houses and other buildings often had been damaged.

Thomas learned to accept outwardly this demonstration of curiosity, but in his own mind, he never quite reconciled the fact that most of the curious ones lived in the public projects. Despite the condition of his own house, Thomas felt and, more deeply within his soul, knew that he was still better off than they. Preacher owned his house. Thomas, because he was a thinker, could not imagine that the children from the projects did not realize this.

During these frequently troubling times, Thomas would think of that old phrase he would hear Preacher, his grandfather, say to no one in particular but always while in a deeply contemplative mood. Thinking of the things he wanted to do for his family, Preacher would utter, “The sun’s gonna shine in my back door someday.”

Because Preacher’s house sat up on blocks, Thomas, with or without his brother, could spend, quite comfort-ably and playfully, many hours under it. When his grandfather was at home, he and Maury, his brother, used to like to listen to Preacher walk from room to room throughout the house. Over their heads, his steps sounded very solid though not loud; there was in them more authority than aggression. Each thud was planted with a grace that automatically allowed the boys to envision their grandfather’s bowlegs walking despite himself. He always seemed to look straight ahead; his feet, however, always seemed to know where to go, turn, and to stop. This intrigued the boys, for with each thud, Preacher seemed as integral a part of the structure as one of its beams.

The house, clearly one of the oldest and among the most tattered buildings in the city, was located on the street that separated the blacks from the whites in his part of town. Therefore, unlike most of the others who lived in the inner sections of Goldsboro, Preacher’s family and the few others on his street could witness each morning the rising sun as it glowed in the east and brought brightness above the hike and then to the houses scattered below and westward throughout the black community of Goldsboro.

Looking eastward, Thomas could sit and watch the other world. His mother and her sisters and brothers often told him about the children from the brick houses and the catered lawns up on the hike. Sometimes, in earlier times, some of those children would come down and play with the darker children below. They would play in the woods behind the white school and sometimes cross over the fence to play in the yard with the children from the leaning house.

By the time Thomas’s generation came along, he watched the children from the other world walk down to the cow pasture and through the woods, both of which belonged to the school and were used by members of the Future Farmers of America. Thomas, as was his nature, would wonder what they had to think about. The children seemed so carefree and independently grown-up. Some of them even smoked. Thomas would crawl under the house (his favorite spot because it was always cooler) and look out in utter amazement. Despite the distance, it all seemed so accessible and desirable. It, however, did not seem any better than where he was—just appealingly different.

From this view of both worlds, Preacher raised his children. They were not strangers in the world. People became all the same very early in his house. In the face of an outside, most-times hostile world, the only defense he preached in the face of hatred, violence, or revenge was unity from within. Thus the strength of the structure of his house yielded through the years the motto of Preacher’s family: “Together we stand; divided we fall.”

Thomas often pondered the full meaning of these words and each day grew increasingly sure he knew what they meant; they brought a feeling of self-confidence and belonging that he could feel within himself and also a sense within everybody else in Preacher’s house.

During these early years, the cool sand under the house continued to provide for Thomas a place of refuge and granted him a vantage point from which he could witness the worlds surrounding him. His favorite spot was right under the front porch, where the sand was cleaner and his view of the other world was clearer.

Stephen Caldwell Wright teaches English and creative writing at Seminole Community College. He is founder and president of the Gwendolyn Brooks Writers Association of Florida, Inc.; a member of the National Planning Committee for the Zora Neale Hurston Festival of the Arts and Humanities; and the author of two collections and ten chapbooks of poetry. His poetry and fiction have appeared in numerous publications, including Phylon; The Colorado Review; The Carolina Quarterly; New Visions: Fiction by Florida Writers; and Beyond the Frontier: African American Poetry for the Twenty-First Century.

Your ticket for the: Preacher’s House