WPRK: The Best in Basement Radio and the Voice of Rollins 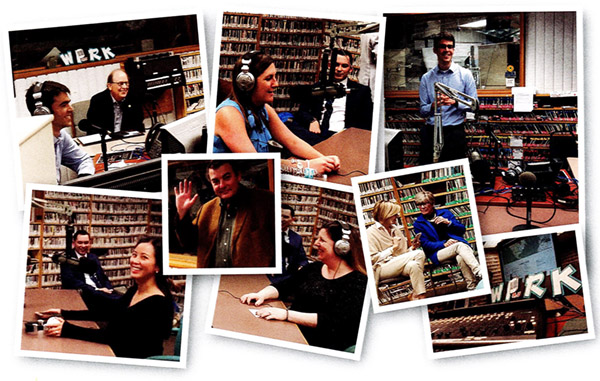 By Wenxian Zhang from the Fall 2022 edition of Reflections magazine

Often called “the best in basement radio and the voice of Rollins,” radio station WPRK has been on the air in Central Florida for 70 years. It is not the first station to broadcast from the Winter Park college, however. As a national leader in pragmatic liberal arts education, Rollins has a long history in radio broadcasting. In 1924, when radio was still in its infancy, Professor Edward F. Weinberg and a group of physics students launched Central Florida’s first radio signal at 580 AM from a small dance studio on campus. Weinberg even came up with the call letters himself: WDBO (“Way Down by Orlando”). It was one of the first college radio stations in America, but Rollins soon had to give up the endeavor because of operational expenses.

When the college’s Mills Memorial Library was constructed in 1951, a media studio was added in the basement of the building, located at the center of campus. Orlando philanthropist William B. Calkins donated funding for equipment, inspired by a wish “to enlighten young people with regard to the great spiritual joys and truths,” Rollins President Hugh McKean noted, and the college’s Board of Trustees passed a resolution to establish a new radio station with a mission that would “be of such nature as to raise the spiritual level of the college and the community.”

On December 8, 1952, WPRK began broadcasting with 10 watts of power. The first voice aired was that of President-Elect Dwight Eisenhower, who offered these lofty dedication remarks: “This new FM station of Rollins College can help to spread and advance the great ideas which keep men and women free. Whether the ideas come from the great music or poetry or other literature of the past, or from debates and reflections of today, the people of our country who are listening in will be the richer.”

Initially, WPRK was on the air for only a few hours each weekday evening, but daytime programs were soon added. After broadcasting on 88.1 FM, its radio frequency was soon changed to 91.5 FM in 1953. With further financial support from the college and community, WPRK’s transmitter power was enhanced to 250 and then 1300 watts.

As originally envisioned, most of the station’s early programs were of a cultural and educational nature, including discussion forums, science talks, sports roundups, and presentations by local artists and community personalities. In addition to a great music lineup, the station also broadcast special events such as Rollins’ Animated Magazine and the Winter Park Bach Festival. By 1962, WPRK had “more listeners per watt than any other radio station in Florida,” according to a 1962 Winter Park Star article. By 1964, the station began to operate seven days a week. During the 1970s, WPRK was on the air from noon to midnight, and summer programs were added in the 1980s. 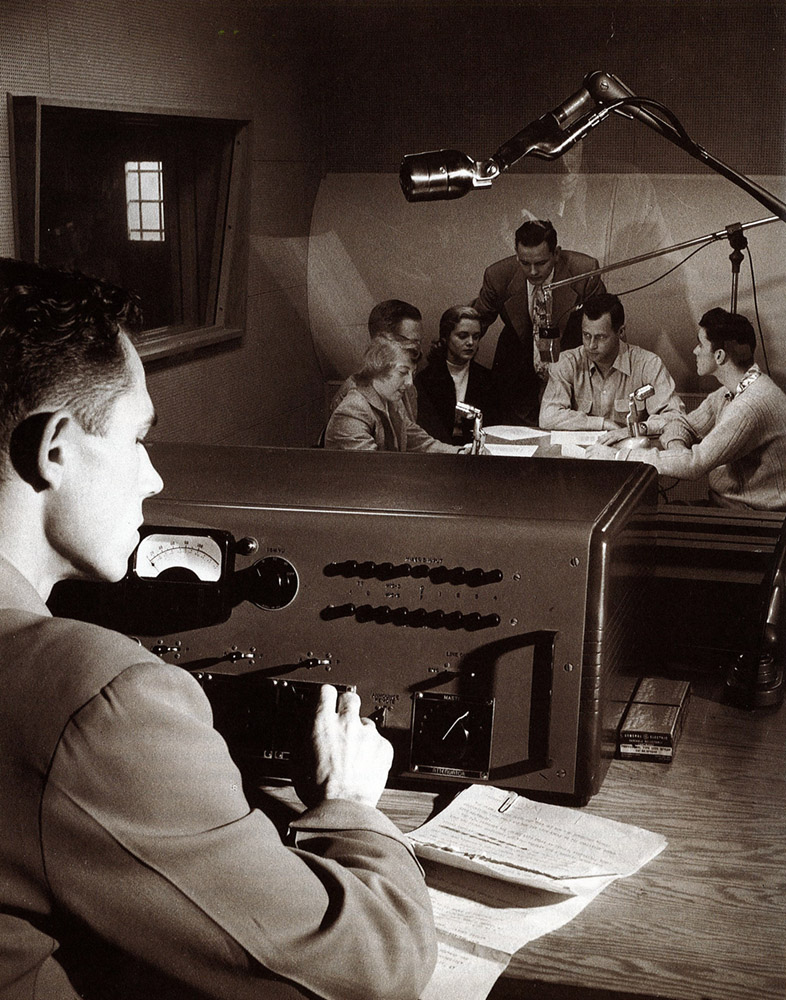 Since its founding, the student-run radio broadcasting of WPRK has been a vital part of campus life. For many years, it was one of the largest student organizations on campus, with dozens of DJs and student volunteers covering different shifts and tasks. The radio operation also has had a positive influence on curricular improvement and student learning experiences at Rollins. Not only were some courses in broadcast production taught over the years, but the station also contributed to the development of the Communications Studies program later on. Many students and alumni have fond memories of their time working at the station in the basement of Mills, and such experiences have had profound impacts on their careers and personal lives. After college, some pursued work in business, finance, education, and marketing, while others engaged in related professions such as journalism and media communication.

Notable among them are Chris “Mad Dog” Russo of SiriusXM (class of 1982), Jim Bowden of Major League Baseball’s Network Radio (class of 1983), and Maria Paz Gutierrez of RadioLab (class of 2015), while the internationally popular DJ Diplo stands out among WPRK’s former community volunteers.

Benjamin Aycrigg, a member of the class of 1949 and WPRK’s first program director in 1952, worked at WDBO briefly before being appointed as an instructor in Speech and English at Rollins. Aycrigg went on to become WKMG’s news anchor in Central Florida for many years and became known as the “Walter Cronkite of Orlando television.” Another notable person affiliated with WPRK was Gordon Fraser, former World War II correspondent and longtime NBC broadcaster, who served as the station’s general manager and greatly shaped its growth between 1982 and 1990.

At the end of Fraser’s tenure, students petitioned the administration for expanded hours, more involvement, and greater control of the programming. Consequently, hours of operation were increased; initially they expanded to include the 8 a.m. to 2 a.m. daily timeslot and then, in the mid-1990s, 24-hour broadcasting began.

Since then, WPRK has been fully run by students with a general manager who oversees its administration. Such initiatives led to the further development of WPRK as a genuine media outlet for the creative voices of students. These programs also helped to distinguish WPRK from other radio stations in Central Florida. For financial and marketing reasons, Rollins even considered proposals for affiliation takeovers by other networks. However, because of students’ strong opposition to these, throughout its history WPRK has remained an independent voice in the metro Orlando region.

In terms of programming, music has been the largest segment since the station’s founding, and classical music dominated the airwaves during the early decades. Then WPRK’s lineup began to broaden to include more pop, rock, and contemporary tunes, reflecting the changing cultural landscape of the country and students’ own evolving interests. Besides classical, other popular genres frequently aired include indie rock, variety, hip-hop, punk, metal, and movie soundtracks.

WPRK has also contributed to the growth of the larger music community in Central Florida. Known as Orlando’s hip radio station, WPRK prides itself on airing music ignored by the mainstream. “It’s a blues station. It’s also, at various hours of the week, a jazz station, a reggae station, a country station and a late-night punk station,” as journalist Dana Eagles has noted in Winter Park Magazine. In addition, WPRK regularly features live performances by hometown musicians in its studio and sponsors concerts on campus such as the Fox Fest, an annual festival with multiple genres by local artists and student talent that takes place during Family Weekend each year.

The twenty-first century marks a few notable milestones in WPRK’s history. From January 17-21, 2005, 25-year-old WPRK DJ David Plotkin successfully completed 110 consecutive hours of on-air programming that included spinning CDs, hosting music bands, and interviewing local artists and civic leaders. His impressive accomplishment exceeded the Guinness World Record in broadcasting at the time and helped raise more than $16,000, which then made streaming possible. In 2006, WPRK.org was launched, and online streaming has since reached global listeners in Germany, Brazil, Finland, the United Kingdom, Canada, Mexico, Ecuador, Australia, and France, among others.

On September 10, 2017, Hurricane Irma caused significant damage to WPRK’s antenna and forced the radio station off the air, leaving online streaming as the only way for listeners to connect for a period of eleven months. Finally, in 2020, after the major renovation of Mills Memorial Center (previously Mills Memorial Library), WPRK moved into its new broadcasting studio on the first floor of Kathleen W. Rollins Hall, where it remains a key part of the vibrant and central student hub on campus.

For the last seven decades, WPRK has been a vital part of Rollins and the greater Central Florida community. Currently, the student-run radio station is on the air and online 24/7 year-round with more than 80 weekly shows, each one crafted by its own set of hosts, who range from students to faculty and staff members to community volunteers. Its signature programs still broadcast new indie music and an eclectic mix of genres rarely played on commercial airwaves.

From alternative music and live performances by local bands to earnest discussions of politics, economics, books, and global issues, WPRK exemplifies “how passion and drive – plus a healthy dash of spontaneity and originality – combine to create a successful enterprise,” Sarah Hartman wrote in Rollins Magazine in 2014. As a celebrated local cultural and artistic undertaking with its unique, independent voice, the station symbolizes “the enduring medium of radio, as well as the importance of local radio stations in the community,” music journalist Lauren Silvestri has noted. “WPRK is college radio at its best,” according to Orlando Weekly critics in 2012: “Run by students, programmed by students, and enjoyed by the entire community. Orlando wouldn’t be the same without WPRK!”

Your ticket for the: WPRK: The Best in Basement Radio and the Voice of Rollins

WPRK: The Best in Basement Radio and the Voice of Rollins