Cyanide at the San Juan 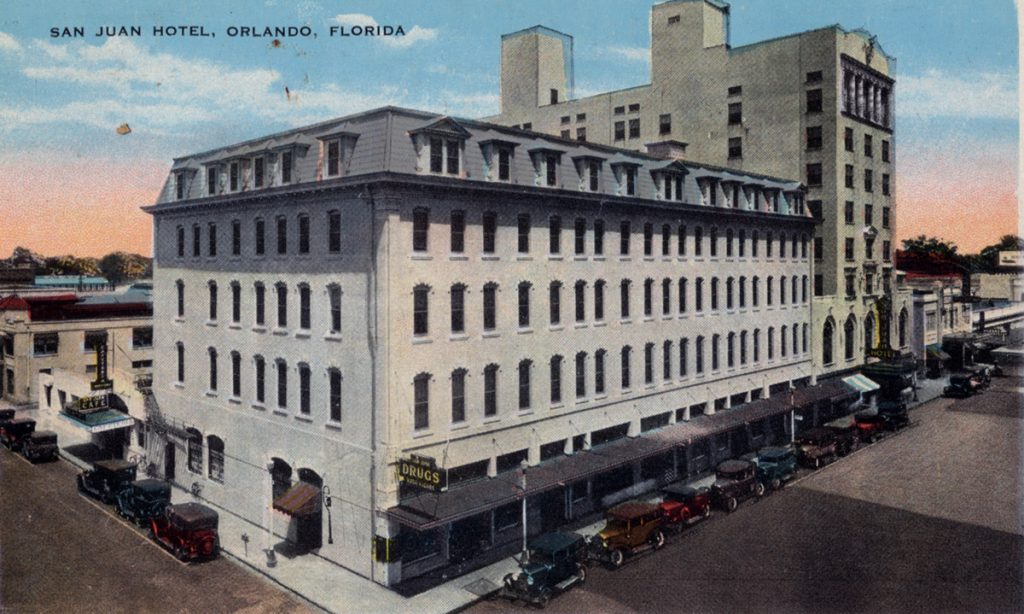 When Orange County Deputy Sheriff George Fields arrived at Room 208 of Orlando’s San Juan Hotel early on the morning of Feb. 16, 1938, 19-year-old Dolores Myerly had been dead for about 30 minutes. Nothing added up: Robert Etty, a painter who lived in Pine Castle, was the last person to see her alive and therefore a prime suspect, but he had also called the police to the scene after first calling a doctor. Murderers seldom call the police on themselves without first leaving the crime scene, nor do they usually call doctors for their victims. In other words, Fields’ investigation had only just begun. No one in the City Beautiful could have predicted where it would lead.

Under interrogation, Etty admitted he had met Myerly earlier that night at Jack Holloway’s Friendly Bar at the corner of Orange Avenue and Wall Street and had arranged to meet at her room just before midnight. Upon entering Myerly’s room, Etty produced a bottle of whiskey and offered her a drink. After taking a sip, Myerly asked, “What in the world did you put in this stuff?” before collapsing at the foot of the bed. Etty first tried reviving her with wet towels and next called physician Duncan McEwan, who found Myerly dead when he arrived. The doctor then called for Deputy Fields, to whom he expressed the conviction that Myerly had been poisoned.

Fields arrested Etty, but the fact remained that Etty had made sincere efforts to revive his companion. It simply did not appear that he intended to kill her. ​County physician Dr. Frank Quillman prepared Myerly’s autopsy, removing her stomach for analysis by chemist E.R. Alexander. According to court records, Alexander discovered 14 grains of potassium cyanide in the young woman’s gut – enough to kill three people. Chemical analysis discovered 8 more grains in the whiskey bottle Etty had provided, and the examiner concluded that the bottle, before being opened and dropped on the floor of Room 208, had contained a staggering 25 grains of the poison.

A search of Room 208 uncovered letters from the victim to her sister in Jacksonville. Called to Orlando to identify the body, the sister told investigators that neither she nor the victim, whose real name was Marie Bayouth, had ever seen Etty before. Etty declared he had never been to Jacksonville. Despite denying having a motive, Etty admitted freely to offering the young woman a drink, but he claimed no knowledge of the cyanide in the bottle. Etty’s account seemed thin, but it formed Fields’ only real lead. 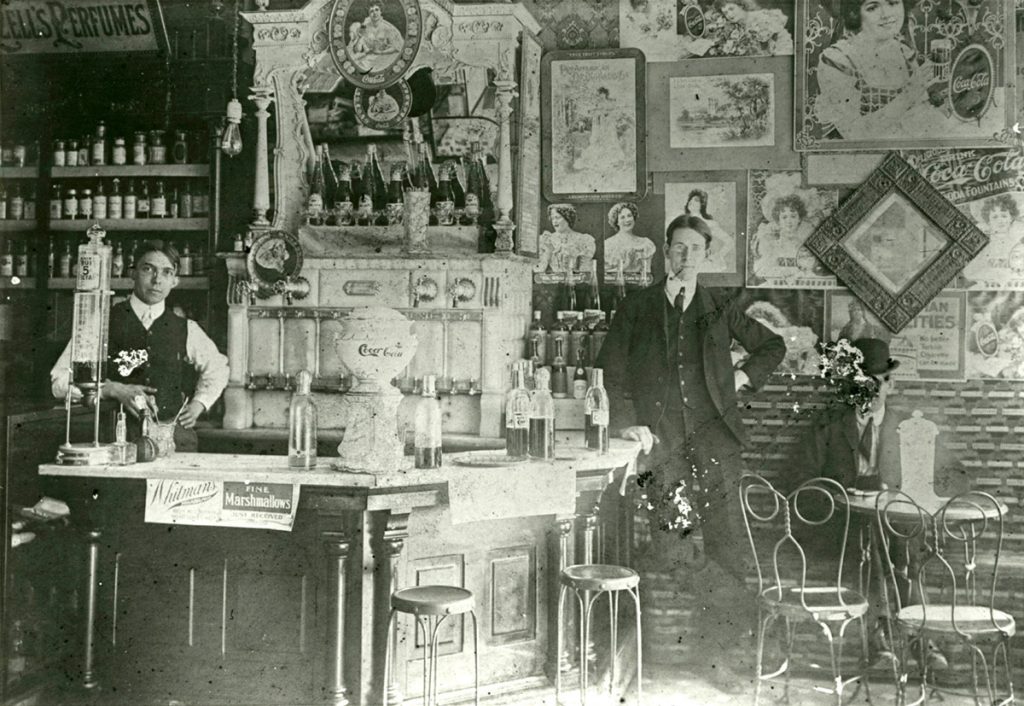 McElroy’s Pharmacy (in an earlier period) was an Orlando institution; its pharmacist found records of a cyanide sale to a chiropractor.

Gift from a Stranger
Etty claimed he had received the bottle earlier in the night from a stranger he met at Holloway’s. The stranger had offered him the whiskey gratis, claiming a preference for beer. Etty said the stranger could not have known he would later meet Myerly in her room, or that he would give her the bottle. The doorman at Holloway’s corroborated Etty’s timeline, confirming that he had seen Etty with a man at the bar. Pressed for details, the doorman remembered only that the stranger complained of denture trouble. It was a single, odd detail, but it was enough to find Donald Long.

After a local dentist reported repairing dentures for Donald Long, both Etty and the doorman identified him as the supplier of the whiskey bottle. Long denied having met Etty, having supplied him with whiskey, and even having been at Holloway’s the night of Myerly’s death. He denied knowing Myerly. He denied ever having purchased cyanide. The last denial led Deputy Fields to talk to druggists. E.K. Enzor, the pharmacist at McElroy’s, found a record for the sale of a quarter-pound of cyanide to a chiropractor named E.N. Sykes. When asked, Sykes claimed he had purchased the poison for Donald Long. “To get to the bottom of this thing,” Long asked for the investigative help of a man named George Coston. 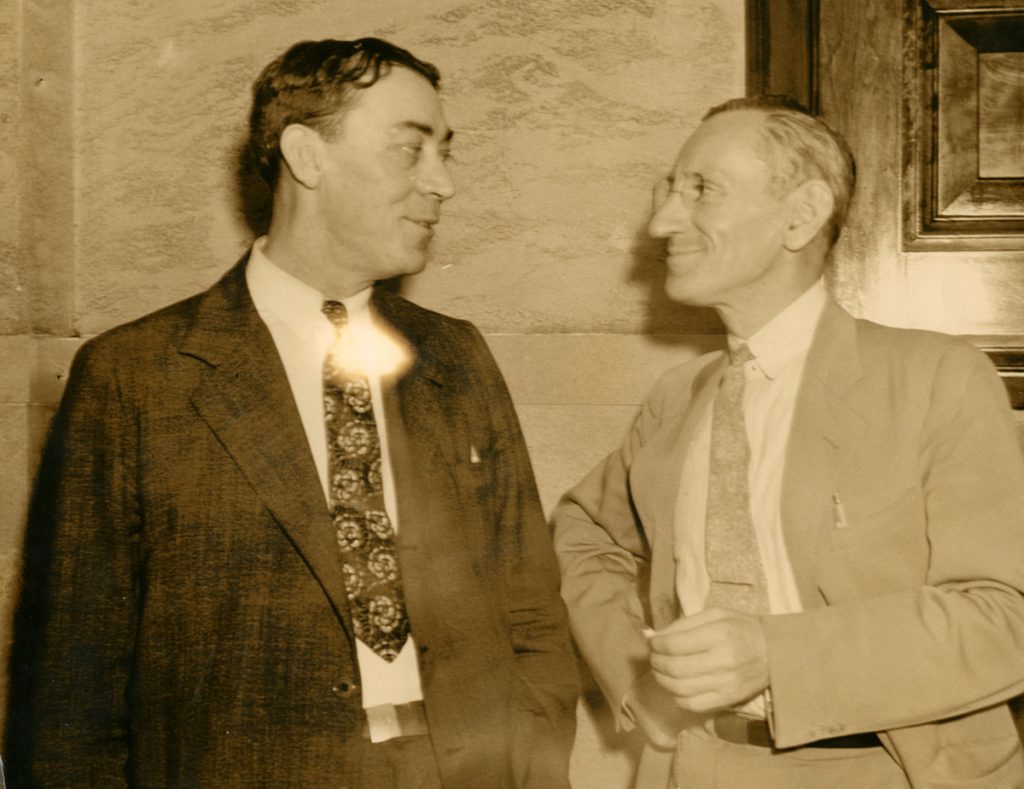 George Coston (left) in 1939 with his attorney, Harry S. Hammond.

“The Efficient Lieutenant of Police”
George Coston was a well-known fixture in Orlando life. A 1929 Chamber of Commerce ad touting the quality of new-resident arrivals suggests he wrote the Chamber in 1923 inquiring about Orlando before moving from his Ohio home. “Mr. Coston is now the efficient lieutenant of police serving under Chief Pope, and points with pride to the fact that he came to Orange County as the result of information sent him.” In the 15 years between his arrival in Orlando and his consultation with Donald Long, Coston had built a career in law enforcement, rising to the rank of police captain. In 1931, he was elected to the office of constable for District 1. His only public blemish was a charge of embezzling, for which he was acquitted. In the year prior to Dolores Myerly’s death, Coston had operated a private security firm.

Cashing in favors with former Orlando Police Department coworkers, Coston met with Long and suggested to investigators that his client be released. Suspicious, Fields retained Long in custody and questioned Dr. Sykes again. In the second interrogation, Sykes suggested that he had purchased the cyanide for Long, because one of Long’s colleagues had promised dividends from the sale of a new insecticide formula. Long’s colleague? “George Coston,” Sykes replied.

Fields arrested a furious Coston, who admitted that Long had been an employee of his security firm but insisted that neither man knew Dolores Myerly. Fields pursued information on both Long and Coston, discovering that Long had a criminal record of automobile theft, and that his cousin sat at that moment in a Jacksonville jail, serving a felony sentence. Fields traveled to Jacksonville to interview Edward Mosely, who confessed that Coston’s security firm was a front, and that Coston intended to blackmail both Mosely and Long (using his law-enforcement knowledge of their criminal histories) into committing insider robberies against businesses contracted to Coston. Mosely claimed neither he nor Long wanted to participate, and that they had been stalling Coston when Mosely was captured on an unrelated charge.

Former Orlando Police lieutenant George Coston, Mosely said, had planned to exploit his knowledge of criminal-justice procedure to establish a crime syndicate, fronting as an investigator for robberies he himself ordered. While astonishing, Mosely’s information still fell short of explaining how Dolores Myerly had come to drink the cyanide allegedly purchased for Coston. Fields recited Mosely’s confession to Long, who admitted to having possessed the fateful whiskey bottle, even as he added yet another kink into the case: Long received the whiskey from George Coston, his former employer and current investigative aide.

As Long’s story unfurled, details became clear: Coston, enraged over Long’s unwillingness to contribute to the theft ring, gifted the whiskey to his former employee, hoping that Long would drink it and die, thereby neutralizing Long as a loose end. Long had told the truth about preferring beer, and Etty had told the truth about receiving Long’s gift of whiskey at Holloway’s bar. Etty accepted the whiskey intending to impress his date later that night. In that way, the cyanide intended for Long found itself on the lips of Dolores Myerly.

Coston only offered denials and promised an ugly, public legal fight. Once behind bars, however, Coston made the mistake of attempting to pass notes to Long through an intermediary. Fields had accounted for this possibility, given that Long had already attempted to retain Coston as an adviser; by offering Long and the intermediary plea deals, Fields caught Coston in his own words. In the precedent-setting and highly public case that followed, with public opinion split – Orlando Sentinel mogul Martin Andersen even penned an editorial praising Coston as an unfortunate do-gooder who should be spared – prosecutors argued for a new mode of understanding murder. Adopting a language of “transferred intent,” prosecutors claimed that Coston should be convicted of murder because he attempted to kill and succeeded in killing. That his victim was unfamiliar and unintended, the argument went, should be immaterial.

Coston was convicted and sentenced to death, before earning a reduction to a life term on appeal. He died in the Florida State Prison at Raiford in 1942, and is buried in Orlando’s Greenwood Cemetery. His transferred-intent murder trial has become a precedent in the prosecution of numerous homicides in the decades since, most prominently in the 1984 case of Orange County Courthouse gunman Thomas Provenzano.

Your ticket for the: Cyanide at the San Juan

Cyanide at the San Juan