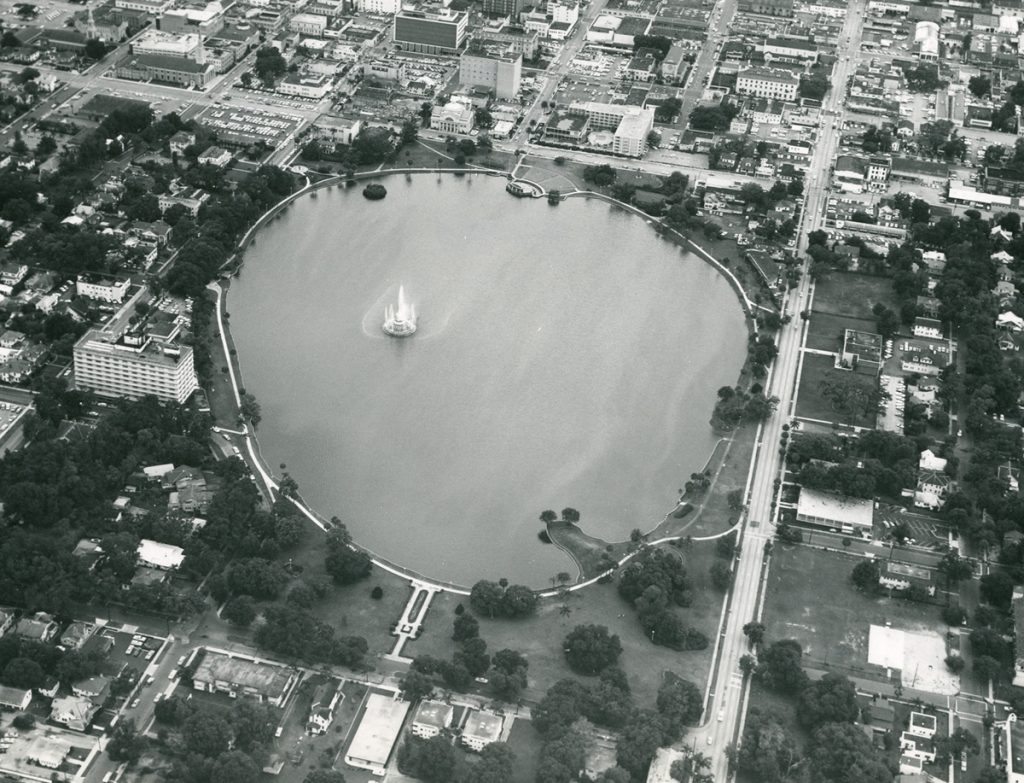 From the Winter 2011 edition of Reflections Magazine

The now-iconic fountain in Orlando’s Lake Eola faced some surprise competition for press coverage on its official debut.

This was a very big deal in Cold War days.

“There was no hiding U.S. concern over Russia’s success in turning out the first man-made ‘moon,’ ushering in the age of interplanetary travel,” another front-page article noted later that week. 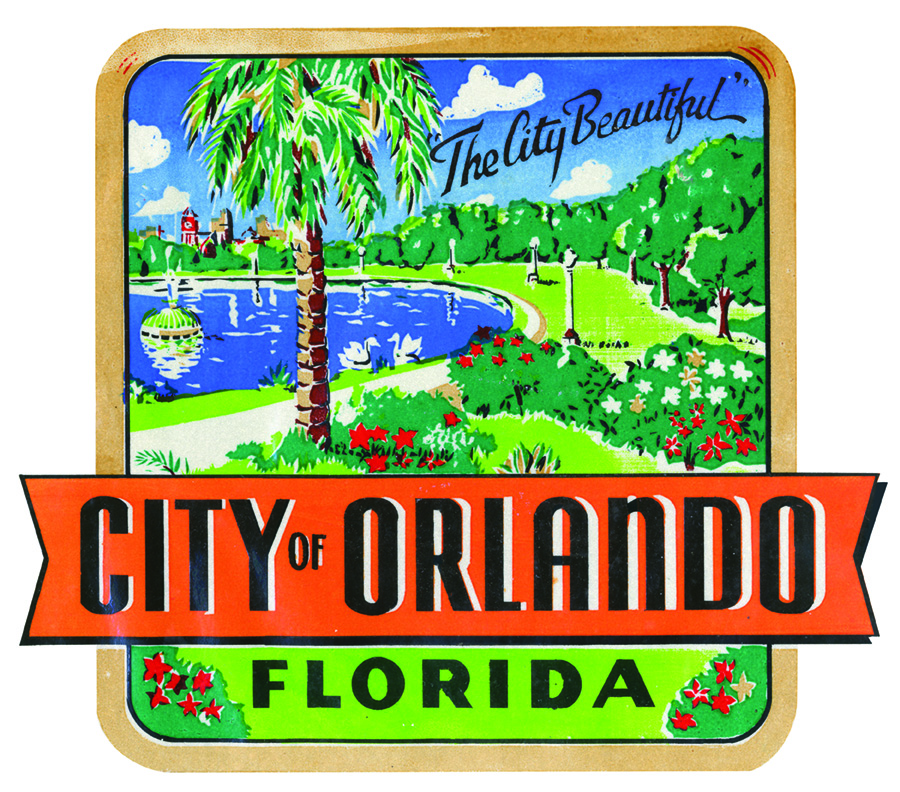 Celebration of the century

But if Orlandoans had a wary eye on the skies and Sputnik when the fountain debuted, they also had their attention focused firmly on the past. The fountain’s dedication was the centerpiece of a daylong centennial party, then the biggest, noisiest, longest celebration in the city’s history.

About 175,000 people ventured out for the afternoon parade and the fireworks and dedication of the fountain, to mark the 100th anniversary of the location of Orlando as the county seat. (The city’s official incorporation in 1875 inspired a second bash in 1975.)

The day’s biggest excitement came after nightfall, at 8 p.m., when the fountain was turned on – “a permanent monument to the city’s first century,” the newspaper proclaimed.

“The crowd gasped as the main spout shot water 75 feet into the air, the multi-hued lights came on, and smaller spouts around the fountain’s rim threw a fountain of water around the beautiful edifice.”

Especially proud was the fountain’s chief champion, Linton Allen, board chairman of the First National Bank of Orlando. During his postwar travels in Europe, Allen had seen “picturesque water fountains in dozens of European cities,” according to the Sentinel. He got the idea for a new trademark for Orlando – “an illuminated water-spouting fountain in Lake Eola.”

In 1956, Allen led “a delegation of civic leaders in the chamber of commerce” who broached the idea to the Orlando Utilities Commission (OUC)and got a thumbs-up. 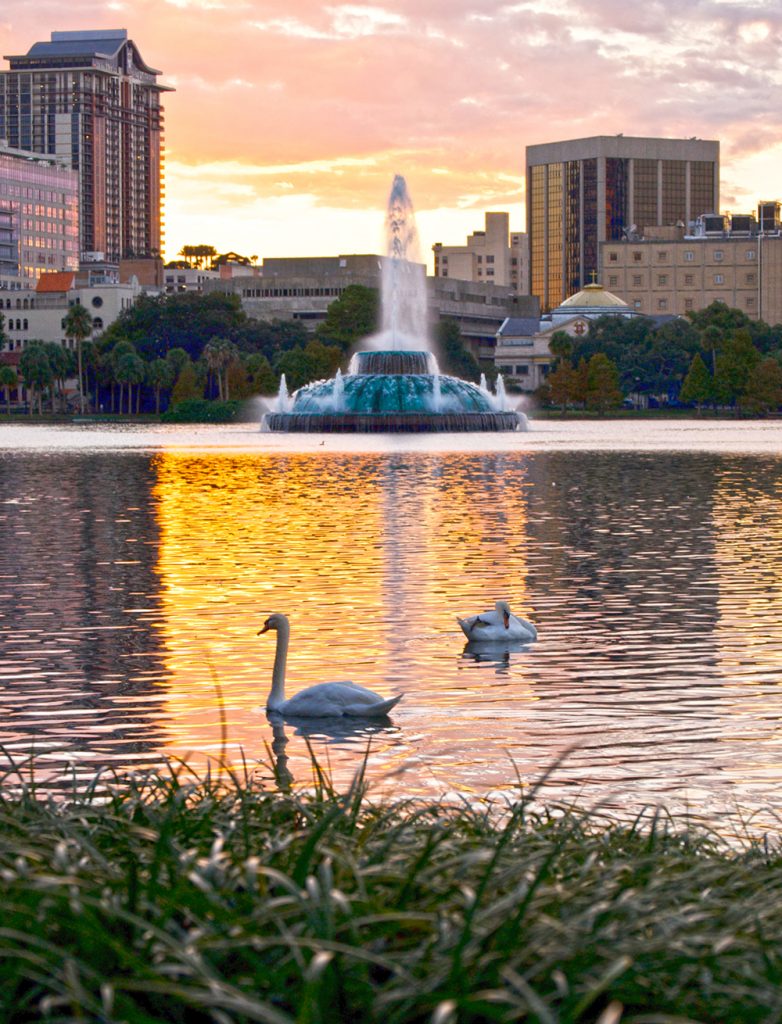 Landscape architect William C. Pauley of Atlanta designed and engineered the plastic and concrete dome; Peninsula Construction built it on a cost-plus-fixed-fee contract with OUC, the Sentinel said.

Construction chief Bill Ravenel recalled a few years ago how much the city’s skyline has changed since he built the fountain – and made Pauley’s sketches a reality.

To support the construction crane, Ravenel brought in a pontoon barge from New Orleans. The first site for the fountain, in the middle of the lake, wouldn’t work because it sat over a deep sinkhole.

Even at the more shallow site that was chosen, pilings using 28 steel cylinders 60-feet long had to be driven into the lake bottom and filled with tons of concrete that had to be taken by barge to the site. Horizontal reinforced concrete beams were placed on top of the pilings to form the superstructure of the fountain, which is 60 feet in diameter.

Three miles of wiring controlled its lights; when it debuted, the complete lighting sequence ran 18 minutes with a power output of 60,500 watts.

“It’s just what I dreamed it would be,” the architect told the Sentinel.

Now, more than a half-century later, the fountain has become the closest thing Orlando has to an icon, its green bubble a permanent part of the city’s mental landscape, a survivor from the Fabulous Fifties that debuted under Sputnik skies. 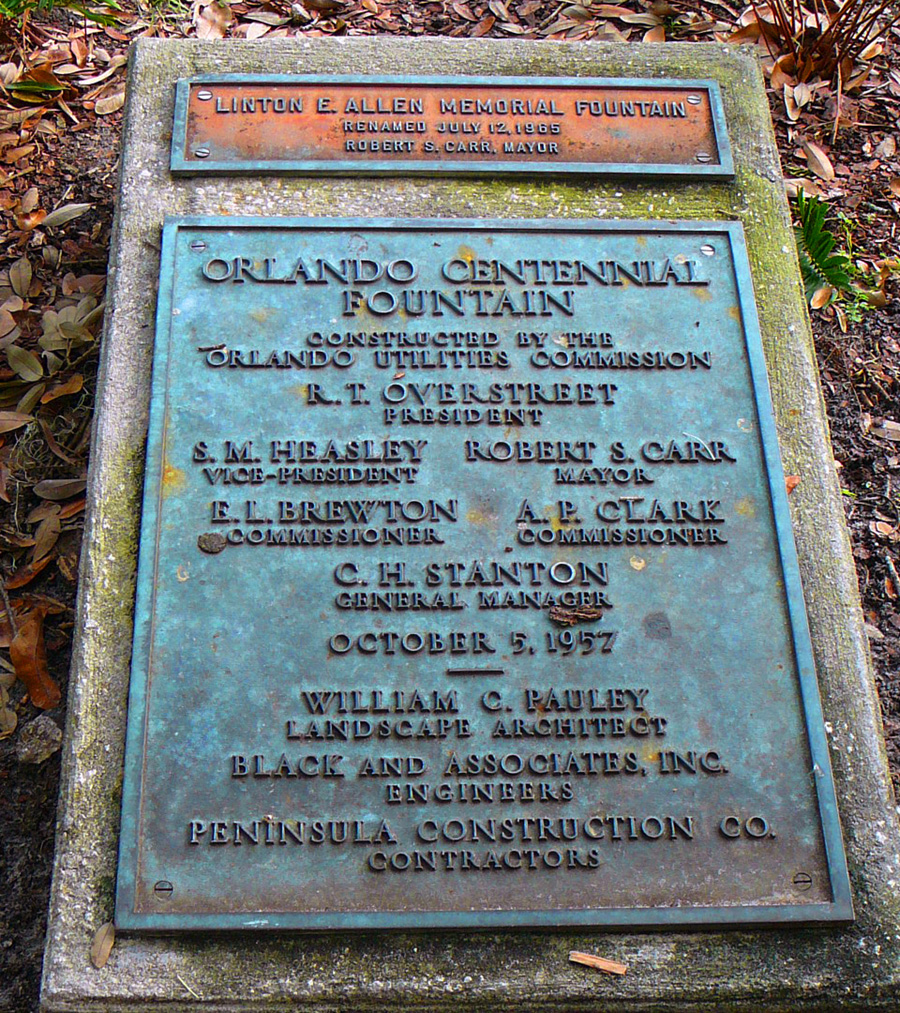 Linton Allen (1889-1965), who championed the idea of a landmark fountain at Lake Eola, founded the First National Bank of Orlando, which became SunBank (now merged with SunTrust). Allen believed that to build a bigger bank, one must first build a better community. He played the key role in bringing the Glenn L. Martin Co. (now Lockheed Martin) to Central Florida and was instrumental in building the First Presbyterian Church campus.

Your ticket for the: Iconic Fountain Reflects City’s Rich Heritage