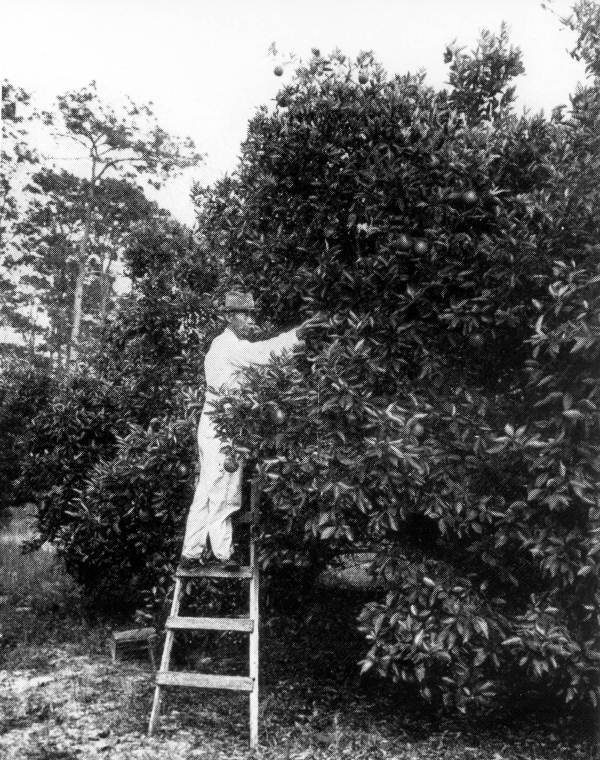 Image from the State Archives of Florida

Born around 1860 in a farming village in China, Lue Gim Gong was only about 12 when he arrived in San Francisco and was soon sent with a group of Chinese workers to North Adams, Mass., to break a strike at a shoe factory.

In North Adams, the young Chinese workers were paired with tutors, and Lue’s teacher, Frances “Fannie” Burlingame, had a lasting influence on his life, inspiring his conversion to Christianity. Lue (pronounced LOO-ey) became an American citizen and, in 1886, settled in DeLand, where Burlingame and her sister owned a five-acre orange grove along North Ridgewood Avenue on the city’s west side.

Using pollination techniques, he had learned in China, Lue developed an apple that ripened earlier than other varieties and a tomato plant that grew in clusters. In his most influential innovation, he crossed the Hart’s Late Valencia with Mediterranean Sweet varieties to produce an orange that bears his name, a juicy and hardy fruit that could take the cold better than most oranges of the day. He also produced a grapefruit that was able to withstand colder temperatures.

At Fannie Burlingame’s death in 1903, he inherited her house and property in DeLand. Lonely in his later years after the loss of “Mother Fannie,” Lue spent most of his time in the company of his horses, Fannie and Baby, and a rooster named March that he rescued from a hawk.

Despite his solitude, Lue’s relationship with the DeLand community continued to be one of love and respect. After he died on June 3, 1925, several leading citizens served as pallbearers. He is buried in DeLand’s Oakdale Cemetery. In 2000, he was recognized by the Great Floridian program for significant contributions to the state’s history and culture.

To learn more, check out this post by Rollin College professor Wenxian Zhang.

Your ticket for the: The Citrus Wizard: Lue Gim Gong