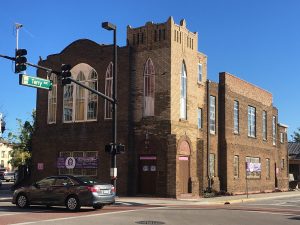 African Americans established separate churches as early as the 18th century, creating the African Methodist Episcopal (AME and AME Zion), Colored Methodist Episcopal (CME), Black Baptist, and other new denominations that became symbols of Black freedom in the South. As racial segregation became more institutionalized and increasingly oppressive in the 19th and 20th centuries, African Americans found safety in the separate world they created, where their own schools, churches, businesses, and associations made their survival possible and fostered the development of a distinct African American culture. Their leadership came from the churches and the community itself, rather than from politicians.

In Orlando’s Parramore neighborhood, African Americans worshipped outdoors in brush arbors and stables while they saved funds to build proper churches, which served not only as places of worship but also as social centers, gathering places, and schools. The 1955 Negro Chamber of Commerce Business Directory listed more than 15 churches in the Black community.

Many of Orlando’s historic Black churches had disappeared or fallen into disrepair by 1996, when Richard Moe, president of the National Trust for Historic Preservation, placed all of the Black churches of the South on the Trust’s annual list of most-endangered places, declaring that “the individual and collective memory of the African-American community is rooted in its churches.” Diminishing congregations disbanded, and others relocated, having outgrown the churches they had labored to build. Some congregations stayed, struggling to maintain their aging structures. From baptisms, weddings, and funerals, to the Civil Rights movement, the churches centered African American life, and their survival provides an important connection with the past.

Though many original homes and commercial buildings are gone, several 1920s churches remain in Parramore, competing against encroaching development for the real estate they have occupied for nearly a century. Part of Parramore lies within the Holden/Callahan National Register Historic District, which offers some benefits for historic properties but little protection against demolition. Three churches have been included in the state’s Florida Black Heritage Trail – a designation that includes no protection – but only two, Mt. Zion Missionary Baptist Church on West Washington Street and the former Ebenezer United Methodist Church at 596 West Church Street, enjoy protection as designated Orlando Historic Landmarks, with included strict guidelines that deter significant change or destruction.

In 2004 the congregation of the Church of Our Lord Jesus Christ of the Apostolic Faith, owners and occupants of the former Ebenezer United Methodist Church, recognized the vulnerability of their picturesque Gothic and Romanesque Revival structure, now standing isolated among gravel parking lots, new high-rise construction, and large sports venues. The church applied for Orlando Historic Landmark status, providing a detailed history of the building and of the Ebenezer United Methodist congregation that underlined the historical importance of the structure.

The Ebenezer congregation built a wooden church on the site of the present church in 1892. As money became available, members constructed a one-story brick building to replace it in 1922, adding a second story in 1924 and a steeple and front steps to complete the church in 1926; the differing colors of the bricks suggest the sequence of the construction. The congregation prospered and eventually outgrew the building, which they sold in 1976. The present owners bought it in 1977, and in 2004 the Historic Planning Board approved its designation as an Orlando Historic Landmark.

An older building such as the former Ebenezer Church requires continuous costly repairs and upkeep, a hardship for a small, less-affluent congregation. Its location undoubtedly adds to the problem, but because of its Historic Landmark status, the striking church stands as a reminder of the Parramore that once was. Other historic churches in Parramore lack any safeguards. The Black Bottom House of Prayer, originally Carter Tabernacle CME Church, at 921 Bentley Street, in urgent need of extensive repairs, faces an uncertain future as new construction edges ever closer, and with no protection from demolition, the expense of the needed repairs to the aging structure becomes more difficult to justify.

The Spanish Mission-style church has stood for nearly a century at the corner of Westmoreland Drive and Bentley Street in what was once “Black Bottom,” part of the Orlando’s African American Parramore neighborhood. In 1916, three families left the Community Colored Methodist Episcopal Church in the Jonestown African American community on Orlando’s east side and organized Pleasant Hill CME west of the city. They first met under a tree, moving in 1921 to a small frame building with no heat or lights on West Washington Street. The congregation worked through most of the 1920s to raise money, building the church at 921 Bentley Street as finances permitted. One member recalled the women of the church holding lanterns for the men working on the church construction in the dark after their day’s work on their regular jobs. 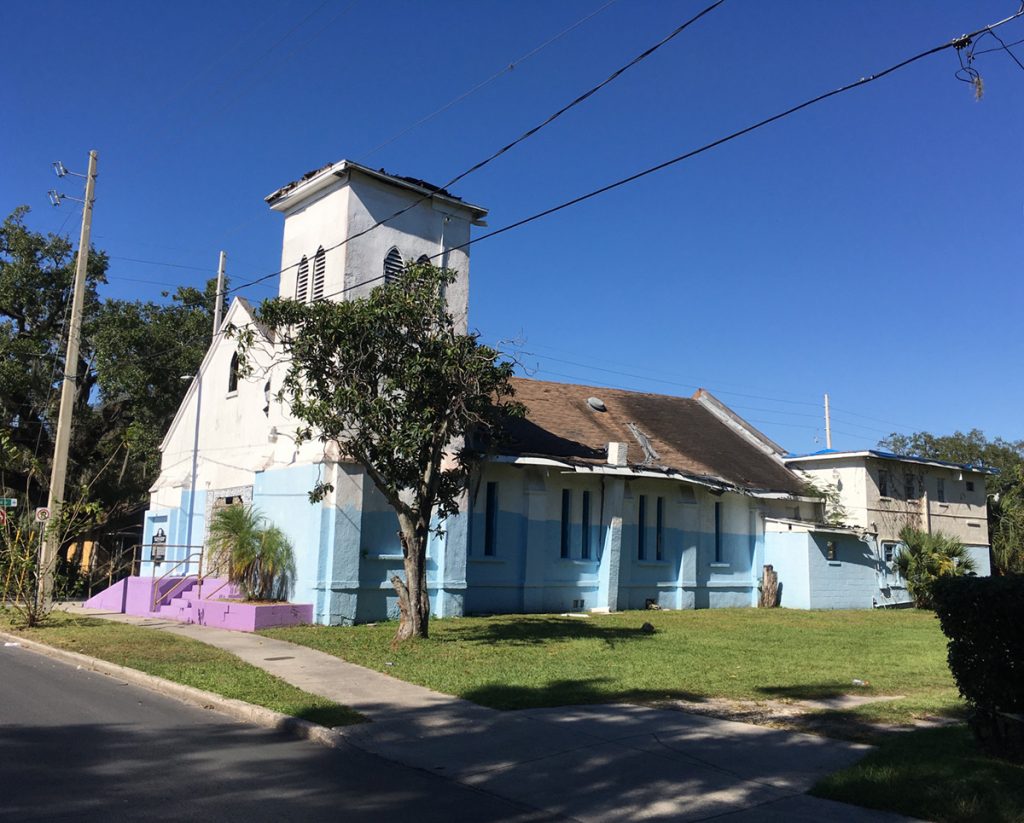 In 2019 the pastor accepted the help of the nonprofit Orange Preservation Trust, and in December the Historic Preservation Board approved Orlando Historic Landmark designation for the church. The next day, however, the roof of the church collapsed, leaving its future in peril.

Orange Preservation Trust, created to promote the preservation and redevelopment of key structures and neighborhood landmarks, serves as a resource for individuals working to preserve and revitalize historic properties.

After successfully nominating the Marsh House in Lake Eola Park as an Orlando Historic Landmark and helping to prevent the demolition of the Grand Avenue Elementary School, Orange Preservation Trust turned to Parramore, where a number of structures contributing to the history and character of the community lie in the path of future development. 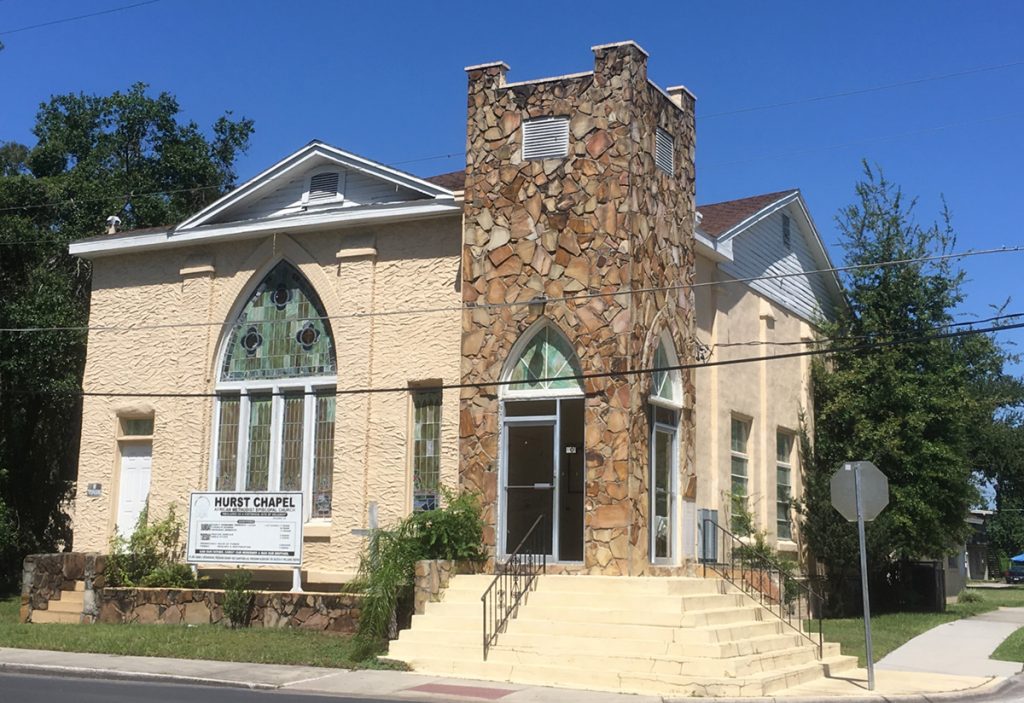 Two other early Parramore churches face encroaching development. Hurst Chapel AME, at 901 Bentley Street, has the distinction of still housing its founding congregation after more than 90 years. Established in 1922, the African Methodist Episcopal Community Church first met in a wood-frame building on Beech Street. In 1925 the congregation purchased property about a block away, on Bentley Street, and in 1926 they moved into their newly completed church, which boasted a bell and a belfry, and sixteen art-glass windows. In the new building, the congregation changed its name to honor AME Bishop John Hurst.

The Romanesque Revival Mount Pleasant Missionary Baptist Church, at South Parramore Avenue and South Street, dates from 1921. The building is now home to the Islamic Society of Central Florida. The congregation organized in 1919 and bought property in 1921 for Orlando’s first masonry African American church. Church members  handcrafted  concrete blocks for the structure. The congregation remained in the church until 1980 and sold it in 1984.

With vacant lots, high-rise construction, and professional playing fields already replacing so much of Parramore’s historic architecture, the all-important churches – the backbone of the Black community – must be preserved. They stand as evidence of African American faith, hope, and fortitude. The history of Parramore lives in its churches.

Your ticket for the: Parramore’s Landmark Churches