Preparing for a Landmark Exhibition

Yesterday, This Was Home: The Ocoee Massacre of 1920

by Pamela Schwartz and Catherine Duffy

History Center staff are preparing a major exhibition that will open just weeks before the 2020 national election and will look back a century to Election Day 1920 in Orange County – telling the story of the largest incident of voting-day violence in United States history, along with its aftermath.

This exhibition is unlike any other developed by the History Center. If you Google the Ocoee Massacre you’ll find various accounts, records, and oral histories of what took place November 2 and 3, 1920, and they are nearly always inconsistent and conflicting; from newspaper accounts of the Ku Klux Klan march through downtown Orlando on October 30, 1920, to a coroner’s inquest about what happened in the jail in Orlando, and July Perry’s burial records for Greenwood Cemetery.

In an effort to uncover the truth and remember the victims of this tragedy, History Center staff have been diligently working for nearly three years to spin the threads that will ultimately become the fabric of the exhibition. From reading every account and news article published, to poring over land deeds and maps, and seeking out descendants of survivors and those involved, we know this is important work to make this time in our history more visible and understandable for you – our members, visitors, and community. We feel this history needs to be heard. If we remove all hearsay, conjecture, and opposing narratives from the many accounts of what happened, we are left with only a very brief overview.

On the eve of the 1920 presidential election, racial tensions in the South were at an all-time high. Segregation was pervasive, and with the resurgence of the Ku Klux Klan throughout Florida, many Black residents were being marginalized, terrorized, and oppressed. Members of the Klan, and other white citizens, made many attempts to intimidate Central Florida’s Black population and discourage or outright prevent them from casting their legal votes. On November 2, 1920, Moses Norman, a Black man, attempted to vote in his hometown of Ocoee. He was denied this right and was ultimately met with violence.

That evening, a group of armed white men, at least some of whom were police officers, surrounded July Perry’s home, a friend of Mose Norman. Perry and the men exchanged words, and shots were fired. His wife and children escaped, but Perry was captured and lynched. His body was left hanging in Orlando as a reminder of the consequences of being what whites perceived as an insubordinate Black man. That night, a white mob burned part of the Black sections of Ocoee to the ground, and by the next day, at least two white men and an unknown number of Black residents had been killed. Over the next six to seven years, these residents would sell their land and flee the area. No Black individuals attempted to move back to Ocoee until at least the mid-1970s.

Beyond Ocoee, this exhibit will begin 500 years ago when the first enslaved Africans were brought to Florida, following themes up through today with the Black Lives Matter movement and will help us engage in conversations for moving forward. Loaned documents, artifacts, and images from institutions such as the Smithsonian’s National Museum of African American History and Culture will help fill in the gaps and tell a fuller history of racial oppression in Central Florida and its relationship to the national experience.

The exhibition will open on October 3, 2020. Special public programming and events will accompany the exhibition throughout its run. For more information, visit our Yesterday This Was Home page.

Do you have artifacts, photographs, or stories (even if passed through the generations) relating to this event, or to other incidents of racial violence in Central Florida? Please contact our collections manager, Whitney Broadaway, at whitney.broadaway@ocfl.net or 407-836-8587.

Pam Schwartz is the Chief Curator and Catherine Duffy is the Curator of Exhibitions at the Orange County Regional History Center. 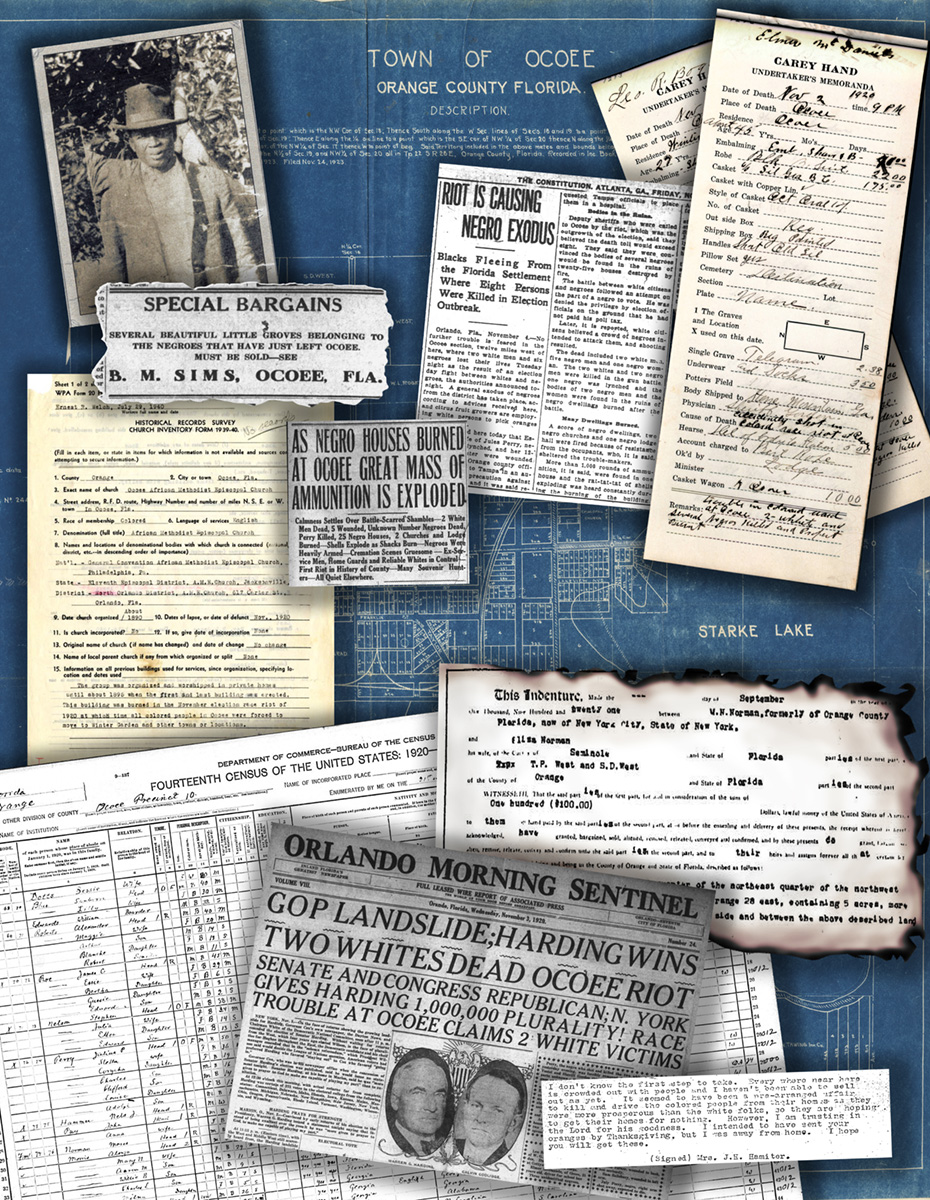 Staff have used the invaluable resources of The History Center’s Collection, the Special Collections & University Archives at the University of Central Florida Libraries, the George A. Smathers Library at the University of Florida, the Orlando Sentinel, just to name a few. Records range from undertaker’s records to news articles, architectural surveys, census records, and more. PHOTO COURTESY OF ORANGE COUNTY REGIONAL HISTORY CENTER

Your ticket for the: Preparing for a Landmark Exhibition

Preparing for a Landmark Exhibition