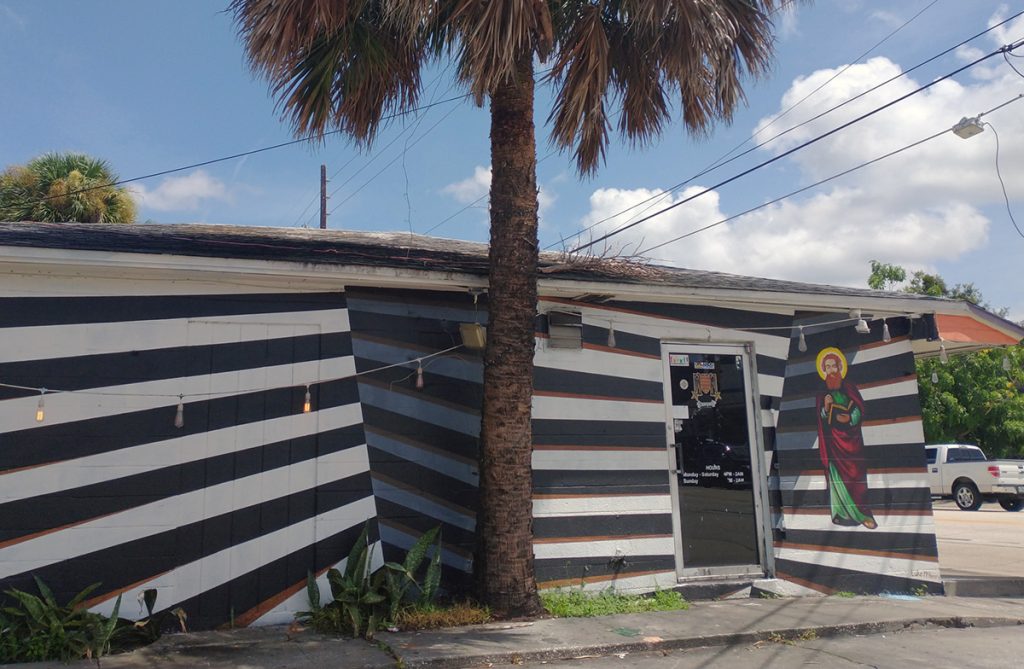 The main entrance to St. Matthew’s Tavern in Orlando, August 2021.

This is part three of a three-part blog series in which we’ll share experiences of a few popular Central Florida gay bars through the lens of oral histories in the collection of the Orange County Regional History Center.

St. Matthew’s Tavern has undergone multiple transformations throughout the history of the building on North Mills Avenue in Orlando. It is unique for welcoming a Catholic congregation on Sunday mornings just as warmly as it does its regular evening bar patrons. Since late 2013, St. Dorothy Catholic Community, a member of the National Catholic Church, has held its weekly mass in the building.

The arrival of the church coincided with renaming and rebranding the bar from Orlando Nights, which was never popular or well loved, to St. Matthew’s Tavern. However, it was just one chapter in the story. The building has housed a multitude of gay bars in the past, including the Silver Hammer, Cactus Club, and Paradise. Community leader Eric Rollings remembers the Silver Hammer fondly.

“Matt’s Tavern used to be a gay bar called the Silver Hammer, back in the day. And they had Lucite bar tops with three-inch Lucite and things like Tiger Beat – you  know, those sexy “teen beat” magazines with pictures cut out – in it. It was so tacky – even back then it was tacky.”

Today, while the tavern is not strictly a gay bar, its long history of welcoming the LGBTQ+ community has made it a gathering place. In the aftermath of the Pulse nightclub shooting, the tavern served yet another purpose – people looking to help any way they could gathered there. Some met their first gay person at St. Matthew’s Tavern, as Rollings recalls:

“We had filled The Center with coolers. [Note: The Center is a nonprofit hub for the LGBTQ+ community, near St. Matthew’s on Mills Avenue]. I had a couple of people call from The Center and they said, ‘Hey, there’s people dropping off coolers, but they really wanted to meet you because they’ve never – some of these people have never met a gay person in their life.’

“And so [The Center] had to close up because they were doing an organizational meeting at 6, and I said, ‘You guys told me that you were open until 8!’ So we put signs up that said, ‘Bring it up to St Matt’s.’ So we were having drinks up there, and people were like – have you ever been to Matt’s Tavern? It’s really dark, it’s really smoky, definitely a late-night crowd but they open for happy hour.

“Anyway, I sat by the door so people didn’t have to [inaudible]. And they’d be like, ‘Um, is there an Eric Rollings here?’ And I said ‘That’s me!’ and ‘Hey, is there anything else?’ And they said, ‘Oh, we’ve got four more in the thing.’ And I was like, ‘Four more coolers?’ ‘Yeah, can we bring them?’

“And so it kept coming and coming, and the manager’s like, ‘Where are you putting [them]?’

“So we had to find – there was, back by the office, a storage room, and we just stacked up the [coolers] and we were like, ‘Oh my God, how many more?’ So, I waited until like 9 o’clock and then I left. Yeah, it was crazy because every time we put something out like that we had more than enough. Of everything.”

Your ticket for the: St. Matthew’s Tavern: Inclusive and Supportive