For a few glorious years, Central Floridians flocked to the “Parade for People Who Would Not be Permitted in Any Other Parade.”

by Whitney Broadaway, from the Spring 2018 edition of Reflections magazine

In December 1985, Bob Morris began working as a columnist at the Orlando Sentinel. His first assignment was the Citrus Bowl Parade. On Jan. 17, 1986, Morris wrote a follow-up to his first article, insisting that Orlando needed a counter-parade.

According to Morris, the Citrus Bowl Parade had become geared toward television and corporate sponsors and no longer reflected the community. Orlando needed to put out a personal ad, Morris wrote: “Attractive, well-endowed city desperately seeking a good time. Prospective suitors must possess a spirit of foolishness, an appreciation of the absurd and the guts to go against the forces of stodginess and convention.”

Morris cited the example of Glenn Terry in Miami, who had created a counter-Orange Bowl parade called the King Mango Strut. Even Tampa had recently debuted the Momma Guava Stumble. So why not the Queen Kumquat Sashay for Orlando? 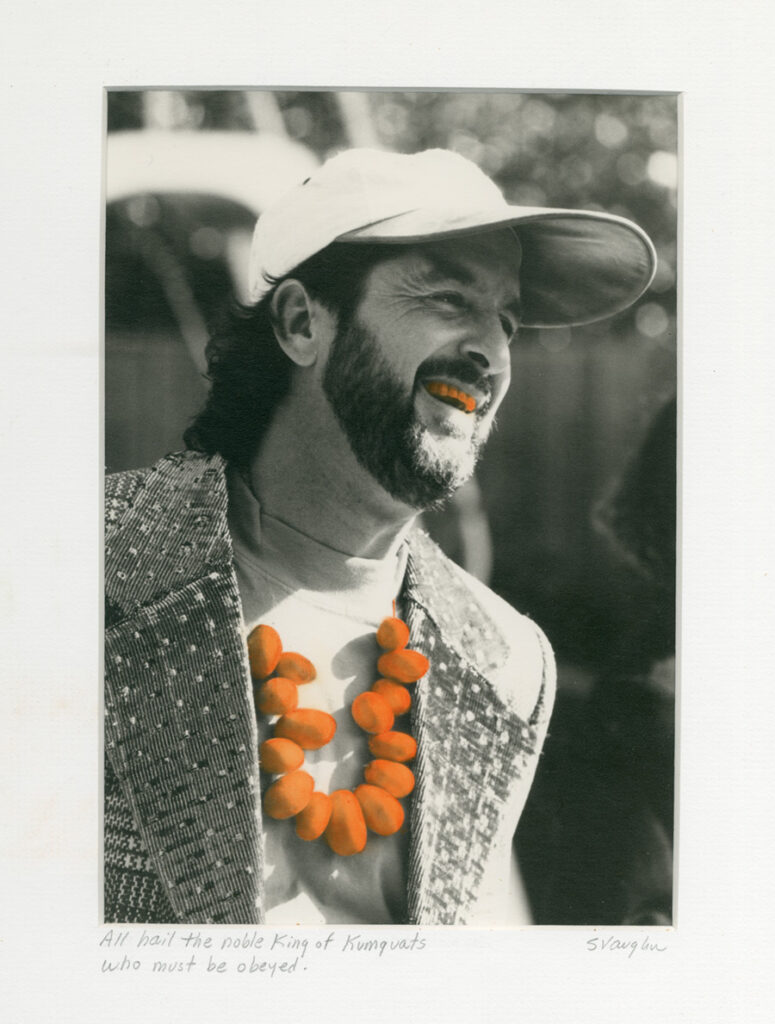 Orlando was abuzz with the idea, and Elizabeth Kurz, an aide to Mayor Bill Frederick, saw the potential of such a parade to help solve one of the city’s problems: getting more people to downtown Orlando at night. Kurz wanted to run with Morris’ “crazy” idea and suggested the Sashay lead straight into the city’s annual “Light Up Orlando” street party downtown.

After a few more columns assuring the public that the Sashay was something that might actually happen, the first planning meeting was held at the Beacham Theatre as an informal brainstorming session with friends of Morris’ and local leaders. In his column on Oct. 3, 1986,

Morris announced that the parade would kick off Light Up Orlando, and would start at “4:41 p.m. in honor of U.S. Highway 441, everyone’s favorite local road, otherwise known as Orange Blossom Trail.”

When the big day arrived – Nov. 8, 1986 – Morris prepared himself for an empty downtown, only to be shocked by a 30,000-person turnout. The Queen Kumquat Sashay was an instant hit and became a staple of downtown Orlando’s November until the mid-1990s.

In fact, that fantastic turnout became one of the most difficult things about planning the parade. The Sentinel would cover the bill for arranging police protection, and every year the

Orlando Police Department liaison would ask Morris how many people he expected to attend. And every year Morris would say, “This might be a slow year, maybe a couple thousand.” “A couple thousand!” the liaison would exclaim, “Bob, you had more than 40,000 people there last year!” Over the years, the crowd at the Sashay was often larger than the actual Citrus Bowl Parade. 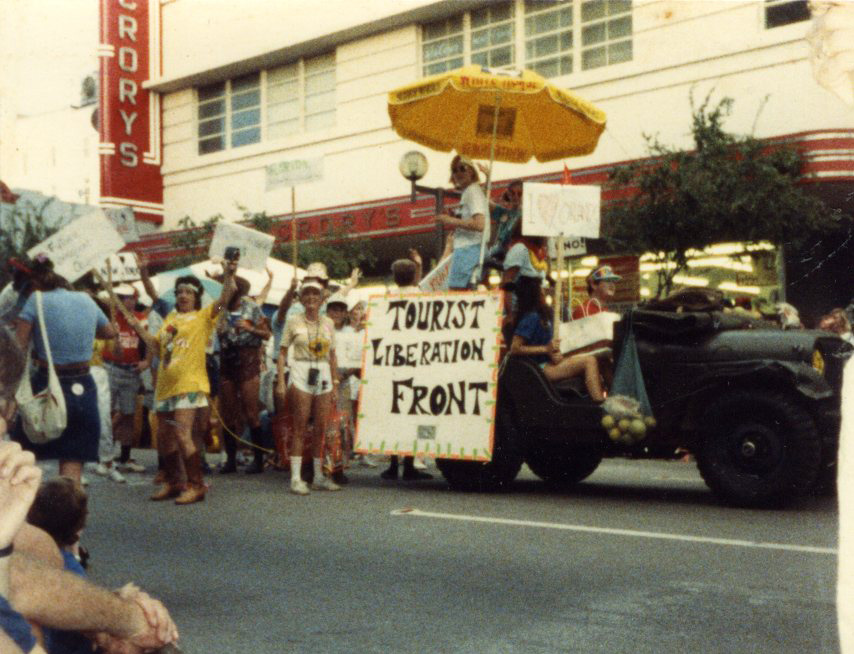 The Sashay was a tribute to all things ridiculous, and the only restrictions about walking in the parade were that you had to have a banner of some sort to identify your group and you couldn’t promote any business or product. You also couldn’t operate a motorized vehicle in the

parade . . . unless you were funny enough. Thee Dollhouse, a strip club on Orange Blossom Trail, crashed the first Sashay when its contingent showed up unexpectedly in the back of a truck, tossing out condoms.

Morris got such a kick out of it that he waved them on in.

The sky was the limit, and Orlandoans brought their creative A-game year after year. Some memorable sashayers include Donald Hulme, the World’s Greatest Accordionist, who led every Sashay playing silly songs; the World’s Worst Marching Band, actually a group of very talented

Walt Disney World musicians who would play all the Disney songs off-tune; the Grizzly Bear Artificial Insemination Team, walking around with plungers; and a group of men in normal clothing with a sign reading “Just Some Guys Who Always Wanted To Be In a Parade.”

Attorney Jim Manuel got a group together every year under such names as the Tourist Liberation Front and the People Who Have Seen Elvis Recently. According to a Nov. 9, 1990, Sentinel article, Manuel’s group had their own specific rules in the spirit of the Sashay: “We don’t make our costumes and signs until noon on Saturday, and we only use what we can find in dumpsters.”

Some groups only appeared once, but many came back year after year. Arts booster Ed Lindgren, owner of Below Zero Studios, made an indelible impression as “Captain Eola,” riding

roller skates with a spouting model of the Lake Eola fountain on his head and leading the Lamar Hotel Marching Transients. For several years, a group of guys in bright orange followed Morris through the parade route; they called themselves Bob’s Barricades and threw themselves around Morris when kumquats came flying his way.

Yes, you read that right: flying kumquats. One of the parade’s traditions was the lobbing of kumquats. The Head ’Quat (Morris himself) and other parade marchers would toss kumquats into the crowd only to have kumquats ceremoniously thrown back at them.

This tradition probably stems from the fact that kumquats are not the tastiest of fruit – at least not until they’re pickled or turned into marmalade with plenty of sugar. According to a 1993

Sentinel article by the Head ’Quat, “The Sashay reminds everyone that the smallest and lowliest member of the citrus family, the kumquat, makes you pucker and want to hurry up and wash

your mouth out. Still, the kumquat is the Noble Fruit because it recognizes its limits. It knows it tastes awful. And it sees no reason whatsoever to grow any larger than it already is.”

Grand Marshal and the Queen

Each year, Morris selected a grand marshal for the affair, and his selections were as off the wall as you might imagine they’d be. The first grand marshal was Longfellow the Cockroach, mounted on a board – a 2.4-inch Madagascar hissing cockroach that was the winner of Morris’ largest-cockroach contest, announced in the Sentinel. The contenders for the 1990 grand marshal were a pig, a woman who claimed to have the biggest breasts in Central Florida, and Bob’s neighbor Jack. Even Morris’ sons were the grand marshals one year and rode their Big Wheels down Orange Ave.

And what would the Queen Kumquat Sashay be without a queen! Any woman (drag queens included) with red hair, in honor of the glorious kumquat, had a chance if they stood on the corner of Concord Street and Magnolia Avenue, where the parade began. Morris would be blindfolded, the redheads would surround him, and whomever he grabbed would be whisked

away into a kumquat-orange Karmann Ghia. The convertible belonged to journalist Michael McLeod, then a Sentinel feature writer, and was only cranked up once a year for this occasion, even though it still usually had to be pushed most of the way.

The Queen Kumquat Sashay fizzled out after Bob Morris left the Sentinel in the mid-1990s. Over the years, more than a few folks have plied Bob Morris to resurrect the event. But, alas, Orlando is, once again, in need of a “Parade for People Who Would Not Be Permitted in Any Other Parade.”

Your ticket for the: The Queen Kumquat Sashay